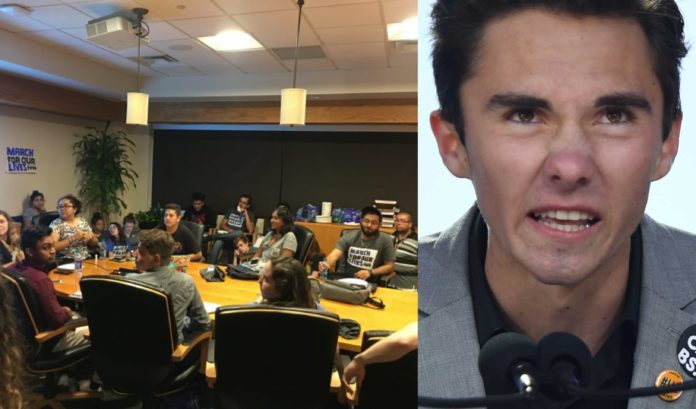 After years of partnering with the University of Central Florida College Republicans and Young Americans for Freedom to honor victims of the terrorist attacks, UCF College Democrats instead opted for political activism training.

A flag for each live lost is annually placed on campus on the morning of 9/11 and observed by campus goers from 7am to 7pm. Usually at least three campus clubs remain stationed there throughout the day; UCF College Republicans, Young Americans for Freedom, and the College Democrats.

However, according to campus publication Knight News, this year the College Democrats were noticeably absent from the event.

When confronted about this, their Vice President (Sophia Garduno) told Knight News that “conflicts of time” barred them from partaking in the memorial. Yes, you read that correctly.

The College Democrats at UCF were “too busy” to properly honor the lives lost on 9/11 and to acknowledge the impact of radical Islamic terrorism.

Garduno went on to explain the importance of this day in American history. “This is a day in which we need to come together as people and not be divided by our party affiliation,” she said.

Garduno’s above quote about coming together and not being divided by party affiliation would lead you to believe that they were simply doing something else to honor the dead.

So what exactly was more deserving of the time and attention of College Democrats on September 11th? It must have been an out-of-town conference with every single member? Or an outbreak of the black plague that required every member quarantined? Maybe they simply forgot and maybe they just don’t care.

All of those or any number of other excuses or reasons would be wrong. All except one. You see, they were busy holding political activism training sponsored by David Hogg’s organization “March For Our Lives”.

I think everyone would agree that 9/11 should be a day of remembrance and coming together as best we can. To recognize the ones we lost, to acknowledge the insidious role and sole responsibility of radical Islam, and to have difficult discussions about what that day meant to each and every one of us.

The fact that the College Democrats chose instead to engage in a highly partisan political training from a group that pushes radical anti-gun measures is both sad and pathetic. Even more so, the fact that they had to be shamed into providing a reason and in turn provided the answer of “conflicts of time” is highly concerning.

They weren’t too busy to engage in partisan politicking. They had a whole 12-hours and weeks of preparation to show their commitment to honoring the dead and denouncing radical Islam. Yet the did nothing.

9/11 is the same time every year. This isn’t some Friday night pub-crawl that someone invited you to last minute, where “conflicts of time” would be a valid excuse. Frankly it is not only anti-American, it is flat out disgusting and depraved.

Remember when State Representative Mike Miller went to a political fundraiser on the anniversary of Pulse after hosting memorial services earlier that morning? Local Democrats, including the College Democrats were incensed. With each and every day they find a new reason to manufacture outrage against President Trump, but are incapable of simply honoring our nation on 9/11.

I guess we should have expected nothing less from the modern Democratic Party and its auxiliary organizations like the College Democrats. I guess we have to accept that only their political posturing and fever dreams deserve attention… and all too often the mainstream media is happy to oblige.

Sophia Garduno and the College Democrats of UCF should be ashamed of themselves. Short of them issuing an apology to the dead and a denunciation of radical Islam, we must all assume that David Hogg’s crusade for gun control is far more important to them than remembering September 11th.