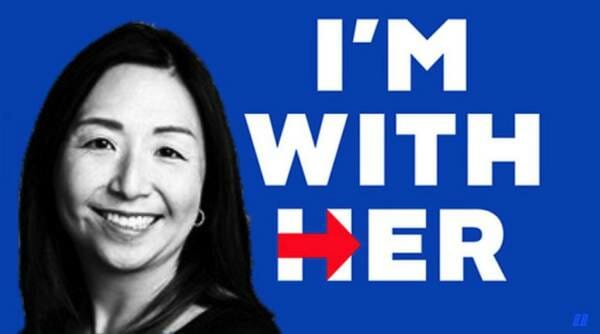 As a private attorney in Robert Mueller’s law firm Wilmer-Hale, Rhee has represented Hillary Clinton personally as well as the Clinton Foundation.

(FIRST APPEARED IN THE GATEWAY PUNDIT)

The potential Mueller prosecution of the Clinton’s nemesis Roger Stone is being headed by Jeanie Rhee, the very same lawyer who represented Hillary Clinton personally in the missing e-mail case and represented the Clinton Foundation in 2015 against a racketeering lawsuit. This comes at time when Democrats are demanding that acting Matthew Whittaker recuse himself from the Mueller investigation because of “political bias.”

As a private attorney in Robert Mueller’s law firm Wilmer-Hale, Rhee has represented Hillary Clinton personally as well as the Clinton Foundation.

Rhee’s conflict of interest is particularly brazen in that she represented Hillary in the missing e-mails case and that issue is one of the questions under which Stone is under investigation according to several witnesses interviewed about Stone by the FBI.

“That Rhee is investigating false allegations against Stone regarding the missing e-mails – the very issue where she represented Clinton is a very serious conflict,” said Stone attorney Tyler Nixon.

Since June, Rhee has been questioning witnesses about Roger Stone in front of the grand jury. Stone, of course, is the colorful Trump loyalist who wrote the bestselling book “The Clintons’ War on Women”, which Trump himself cited on the campaign trail in 2016.

During a tsunami of illegal leaks from the Special Counsel’s office, Rhee is said to be investigating Stone to determine whether Stone had knowledge of the content or source of the Clinton material published by the on-line website Wikileaks, including the allegedly stolen e-mails of Clinton campaign chief John Podesta. Wikileaks publisher Julian Assange himself announced to the world that he had such material in a CNN interview with Anderson Cooper in June of 2016.

Stone has steadfastly denied that is the case. But the Special Counsel’s legal reach is without limit and multiple Stone associates said the FBI questioned them about Stone’s family life, personal life, political life and business life. Sources tell Big League Politics that a working group within the Mueller task force monitors all of the veteran political strategist’s social media, including appearances on Infowars, sometimes with Alex Jones.

The New York Times reported on January 20th of 2017 that Roger Stone was among three Trump aides who were under government surveillance in 2016, many months before the appointment by Deputy Attorney Rod Rosenstein of Special Counsel Robert Mueller. One of the four reporters with the byline told the Gateway Pundit that they “stood by the story”, although they maintained that the warrant under which Stone was surveilled was not necessarily a FISA warrant, but may have been a court warrant requiring probable cause.

At the same time, the redacted Carter Page FISA warrant application shows multiple applications. Stone’s attorneys filed more than thirty FOIA requests regarding FISA and were in all cases told that that information is exempt from the FOIA act, on the basis of “national security.” This is yet another reason why President Trump should declassify and completely redact all the FISA application material. If Stone was under surveillance, the government could be required to explain what, other than his long relationship of Donald Trump, justified the violation of his 4th amendment rights.

At the direction of his lawyer Bruce Rogow, Stone took two polygraphs examinations administered and analyzed by two of the nation’s leading experts who said Stone was truthful when he denied receiving WikiLeaks material from Assange or anyone else. While Polygraphs exams are not admissible in court the FBI and Federal Government use them extensively .

Democrats demand Acting Attorney General Whitaker recuse himself from over-site of the Mueller probe due to his stated political opinions while finding nothing troubling about Rhee’s role in investigating Stone shows the blatant hypocrisy of the left.

Stone, is a veteran of ten Republican Presidential campaigns starting with Richard Nixon through Ronald Reagan, Bob Dole, George H.W. Bush, George Bush and Donald Trump. The veteran Republican strategist has aggressively asserted his innocence with any crime in connection with the 2016 Presidential race

The emergence of Rhee as the bulldog prosecutor in any potential charges against Stone is stunning evidence of the political bias and motive of the Mueller probe that President Trump has called a “witch hunt.”

“If they indict him, it will be a real travesty, because they don’t have enough to make out the elements of any crime I’ve seen yet,” Stone lawyer Tyler Nixon said

Stone first urged Trump to pursue the presidency as early as 1988, and served as chairman of his presidential exploratory committee in 2000. Stone served as a political consultant for Trump in 2012 and 2015, leaving the campaign to write his book on the Clintons in August 2016.

“The fact that Jeanie Rhee, who is Hillary Clinton’s personal legal attack dog is heading Mueller’s probe of Roger Stone proves the outrageous partisan nature of this entire inquiry” Saint John Hunt, who has co-authored several books with Stone told the Gateway Pundit.

Stone has already won an expensive defamation lawsuit and successfully had a second lawsuit by an Obama backed legal foundation dismissed. He still faces a lawsuit by the DNC, where he is being sued with Donald Trump Jr, the Trump campaign, Jared Kushner, Vladimir Putin, the Russian intelligence service, Julian Assange, Wikileaks, the Trump campaign and the Republican National Committee. Stone’s lawyers have already delivered a preservation letter notifying the DNC that they will ask to examine the DNC computer servers in discovery and asking them to be preserved.

Stone is also being investigated by the Senate Intelligence Committee and the Judiciary Committee, both of whom have declined his demand to testify publicly. In the meantime, incoming House Intelligence Chairman Adam Schiff has served notice that he will reopen the Russia investigation and is likely to serve a subpoena on Stone.

Facing personal destruction and bankruptcy, Stone’s lawyers estimate his legal costs to defend himself could run as much as $2 million. He has set up a legal defense fund at StoneDefenseFund.com