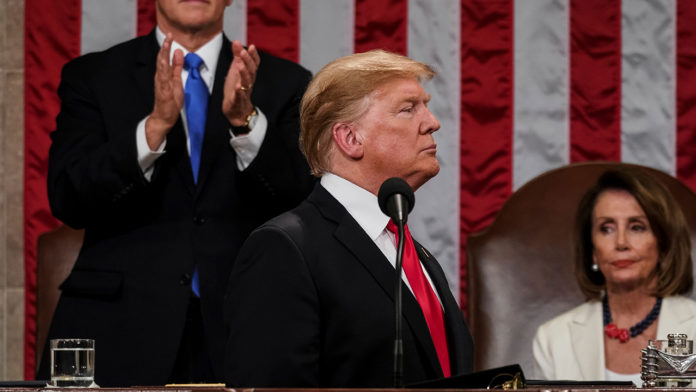 Unifying, bipartisan messages are interwoven with aggressive ideological attacks, showing you the yin and yang that is this President.

It’s been a wild ride for Washington going into 2019. The government was shut down due over border security, and in the ongoing dick-measuring contests, it was unclear if a State of the Union address would happen at all.

Luckily, President Trump performed a strategic retreat, opening up the government for three weeks, allowing the can to be kicked down the road as he plots his next move. This gave Speaker Pelosi cause to invite the President to the State of the Union.

Originally meaning to speak about unity, President Trump reportedly changed the speech last minute, and it shows. Unifying, bipartisan messages are interwoven with aggressive ideological attacks, showing you the yin and yang that is this President.

President Trump began speaking about the unlimited potential of America, immediately calling for unity, asking for Congress not to govern as two parties, but as one nation. He called for “not a Republican agenda or a Democratic agenda, but an agenda of the American People.”

President Trump focused on two major anniversaries of American accomplishments: the D-Day and the Moon landing, the latter of which led to Buzz Aldrin saluting his President.

He called for members of Congress to reject the politics of revenge for cooperation, to the dumbfounded faces of many Democratic Congresswoman, including Alexandria Ocasio-Cortez (D-NY).

Though President Trump went military-heavy with his speech, he also made it clear that our soldiers are defensive, not offensive.   “Great nations do not fight endless wars,” President Trump declared to his generals.

There was some wild interesting audience participation, including multiple bipartisan chants of “USA USA USA!” and Congress singing “Happy Birthday!” to Judah Samet, who survived both the Holocaust and the more recent Pittsburgh Synagogue shooting.

But these great unifying moments were shattered by equally ruthless attacks on his Democratic opponents. He condemned “ridiculous partisan investigations”. President Trump also went after socialism as well in a line that feels written by Charlie Kirk himself, declaring that the United States will “never become a socialist state.”

But by far, if there is one part of the speech that was most memorable it was President Trump praising women in the workforce, even getting a standing ovation from the “women in white” coalition after praising the fact that “we have more women serving in Congress than any time”.

That one amazing accomplishment by those amazing women lead to a unified chantof “USA USA USA!”. For one moment, it seemed all Americans finally unified, showing that through women, the State of the Union is strong.