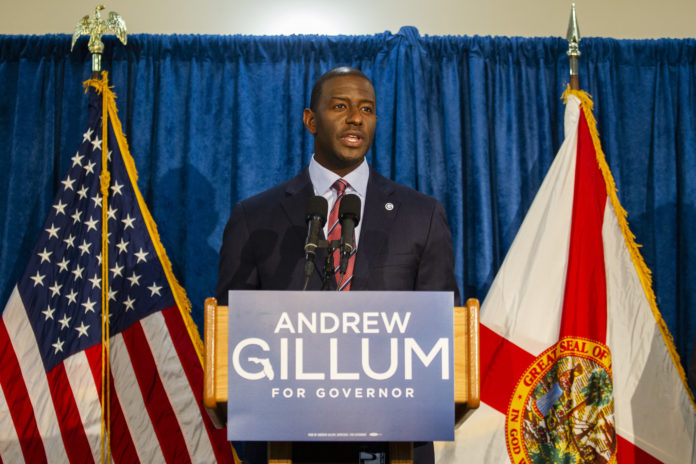 After the failed socialist candidate for Governor posted a message teasing an announcement on March 20th, many are speculating about what exactly Gillum will do while still under an ethics investigation and FBI probe.

In Democrat politics, it seems that losing crucial statewide races gives you the right to think that you are somehow presidential material or someone that people should listen to on important political matters. We have seen it with Stacey Abrams in in Georgia, Beto “Francis” O’Rourke in Texas, and now Andrew Gillum in Florida.

The self-admitted socialist, who now provides paid political commentary to CNN, released a video on social media several days ago teasing an announcement in Miami, FL on next week on March 20th. Some are speculating that he will announce he is running for President on the Democrat line, some have said he will announce a challenge to Marco Rubio for United States Senate in 2022, or possibly a new political project for him to raise and spend millions on behalf of fellow far-left candidates going forward.

As someone who spent a considerable amount of time exposing Gillum for the alt-left ideologue that he is during his campaign for Governor in 2018, I will vigorously oppose any movement he makes. Until we know what exactly he is doing, let’s break down his options.

1). The Next Obama: People point to his oratory skills and ability to raise small dollar donations as two big reasons why Gillum should take a stab at securing the Democrat nomination for President in 2020. Almost every single announced candidate or rumored candidate spent a considerable amount of time bolstering his candidacy against Congressman Ron DeSantis for Governor of Florida and would have a hard time walking back their kind words of him if he jumps in. The 2018 Democrat primary for Governor of Florida also demonstrated how Gillum can win with less money and name ID than more established political players. It is honestly his best option. He has the closest connection to former President Obama and his wife Michelle, who herself is a rumored potential candidate. Gillum/Obama 2020 or Obama/Gillum 2020?

2). Taking On Little Marco: Most Florida Republicans are sick of dealing with the impotent United States Senator who has periodic bouts of Trump Derangement Syndrome, ghostly spasms of his pathetic attempt at wrestling the GOP nomination from Trump during the 2016 Republican primary for President. This would be an early announcement for a race that is very far away for Gillum, but it could be a good way for him to keep his connection to donors and supporters active as the possibility of Rubio resigning pops up from time to time.

3). Money For The Movement: It’s unclear how long Gillum can use his standing among the alt-left crowd to raise millions in small dollar contributions, but he has had no problem doing so since losing his bid for Governor of Florida. He could open a federal political action committee to match his statewide committee and ride the wave for as long as he can.

Their isn’t much else to say until next Wednesday, which is coincidentally my 27th birthday. Maybe I will travel to sunny South Florida and bullhorn his “announcement”, maybe not. However, one thing is perfectly clear to me, Andrew Gillum didn’t “bring it home” in 2018 and he will not “bring it home” in 2020 as long as I have air to breathe.