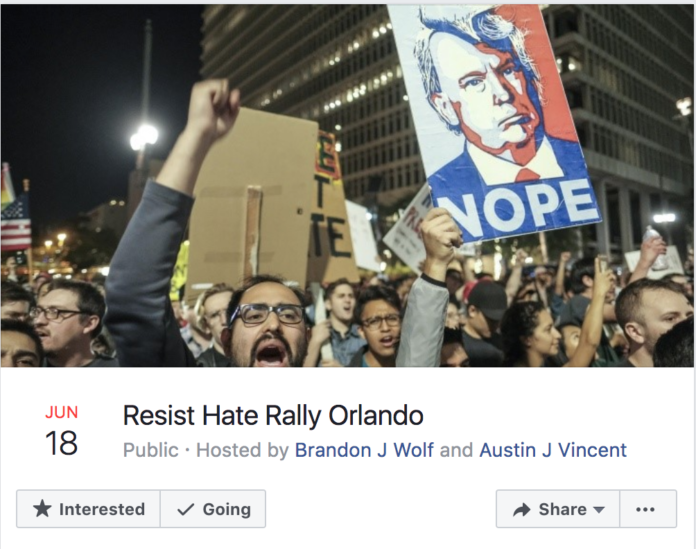 A Facebook event page attempting to organize a counter-protest to President Trump’s historic re-election rally in Orlando on June 18th has banned open comment after ridicule by Trump supporters.

Trump-hating leftists aren’t having the best of luck when it comes to organizing their “Resist Hate Rally” on the same day President Donald Trump is due to pack the Amway Center in Downtown Orlando for an historic campaign kick-off for his 2020 re-election bid. The local media, as we predicted, is promoting this rally and should be held responsible for the violence it will breed.

The event page was created on Facebook shortly after local news reported on the President’s upcoming visit, by predictably proclaiming that they would tell Trump that “hate has no home here.” Those early moments for the page were its best. Then Trump supporters quickly flooded the group with comments and posts pointing out the hypocrisy of the anti-Trump activists.

Patriots posted thumbs up memes of President Trump. Others highlighted how the supposedly non-violent gathering was debating on how to form a human chain to physically block entry by peaceful Trump supporters to the Amway Center.

In response, leftists cried to the administrator of the event page to ban opinions or comments they didn’t like. Shortly after, all comments were shut down on posts made in the group. SO. TOLERANT. SO OPEN-MINDED.

Leftists lamented how Trump decided to hold the rally on a date so close to the Pulse anniversary, demanding that he not say one word to honor the victims of the terrorist attack at the nightclub just moments away from the Amway Center in 2016. Yeah… they are so blind in their hatred for Trump that they would rob the community of the President offering words of support on the 3rd anniversary of Pulse and strong leadership against Radical Islam.

Debate continues on how to best sabotage the gathering as a whole, including signing up for tickets to the rally and not actually going so there will be a bunch of empty seats. Some plotted about going extra early to fill up the adjoining Geico parking garage, where they theorized over 1,800 parking spots could be stolen in an effort #Resist Trump.

Idiotic Orange County Democrat Executive Committee Chairman Wes Hodge posted about having 40,000 counter-protesters outside of Amway Center to overrun Trump’s rally, proving how detached leaders of the Democrat party have become in their quest to destabilize this nation and #Resist Trump.

If you want to join the event page and keep an eye on what this dangerous group of left-wing activists are plotting for President Trump and his allies on June 18th, click here.

We will continue to monitor the group for any calls for violence or physical confrontations and hope the Orlando Police Department / Secret Service are doing the same.