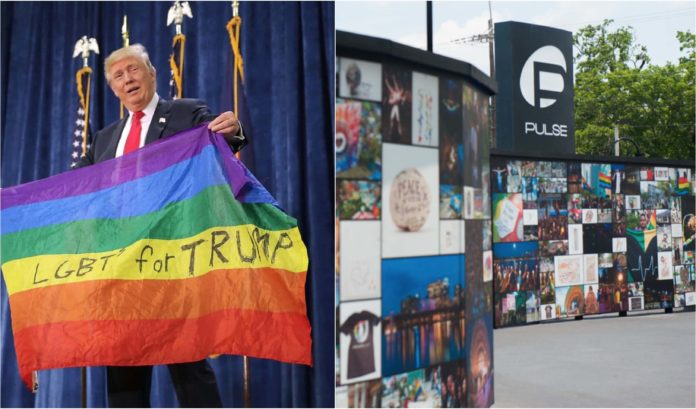 Just as we did last year, conservatives in the Central Florida area plan to gather at the Pulse memorial on June 12th to show our support for the LGBT community.

Despite death threats, rape threats and other threats of severe bodily harm… I was honored to lead a group of conservatives to the Pulse memorial last year to lay down a wreath and flowers. 49 members of our community were viciously killed by a terrorist motivated by Radical Islam. We did it because it was the right thing to do and because President Trump has been unfairly maligned as anti-gay, an attack as vicious as it is untrue.

Trump was the first candidate to ever display the LGBT flag on stage during a rally. He appointed the first openly gay ambassador. He has launched a global effort to decriminalize homosexuality and support LGBT people around the world. On Friday, President Trump became the first Republican president to recognize Pride Month in a series of tweets.

As we celebrate LGBT Pride Month and recognize the outstanding contributions LGBT people have made to our great Nation, let us also stand in solidarity with the many LGBT people who live in dozens of countries worldwide that punish, imprison, or even execute individuals….

As members of the MAGA movement and supporters of President Trump, it is more important now then ever to follow his lead and showcase our support of the LGBT community at this year’s ceremony outside of Pulse. Wear your MAGA hats and Trump gear. Come to remember those lost and meet new friends.

The only way false statements about Trump being anti-gay will be dispelled, is through direct action in the LGBT community. As residents of Central Florida, we have a unique opportunity to show thousands on June 12th that we stand with them. The scary image of gay-hating bigots they have in their heads will vanish.

With President Trump kicking off his 2020 campaign bid in Orlando less than a week after the third year anniversary of Pulse, he needs our help communicating to the world that he is an ally. A friend and not a foe. This terrorist attack was not just an attack on members of the LGBT community, but on America as a whole.

As Chair of Youth Outreach for the Orange County Republican Executive Committee, I am encouraging patriots to gather at the Pulse Memorial at 630pm. Event details can be found here for the general gathering.

Those wanting more details on how they can support these efforts can email me directly at engelsja@gmail.com or call me at 231-360-1411.