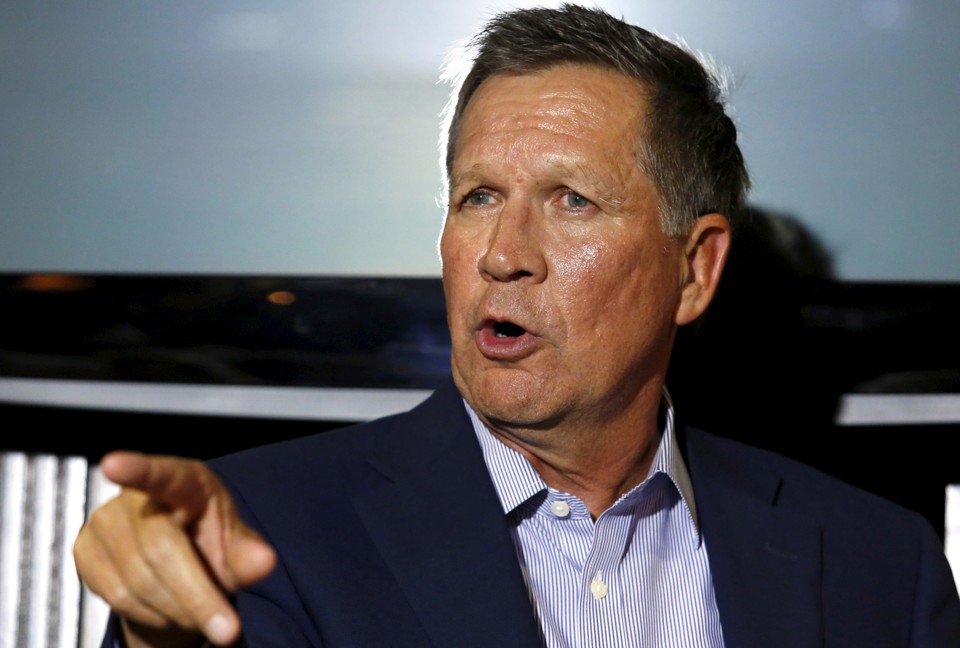 On Nov. 17, 1993, with President Bill Clinton in the White House, then Ohio Rep. John Kasich joined 131 other Republicans and 102 Democrats to vote “yes” to the passage of the North American Free Trade Agreement (NAFTA) Act, confirming his role as an unabashed free-trade supporter willing to sign onto the agenda of President George H. W. Bush’s “New World Order.”

How Kasich Cost Ohio To Lose Manufacturing In The 1990s

This did not escape the attention of Dustin Ensinger, who penned an article entitled “Strickland Surrogates Hammer Kasich for Position on Free Trade,” dated Sept. 10, 2010 and archived on the Internet website “Economy in Crisis.” The record shows Ohio has lost nearly 300,000 manufacturing jobs since 1997, or 29 percent of the jobs in what is typically one of the higher paying sectors of the economy, Ensinger pointed out.

In 1997, manufacturing made up 23 percent of Ohio’s total economic output. By 2008 that was down to just 14 percent, as jobs have been outsourced to low-wage countries like Mexico, China and India. Overall, Ensinger stressed, the loss of good paying manufacturing jobs has caused Ohio’s real median income to fall by 10 percent from 2000 to 2008, or $2,300 below the national median.

When this became an issue in the 2010 gubernatorial election in Ohio, Kasich, who defeated that year sitting Democratic Governor Ted Strickland, repeatedly dodged the question when asked about his votes to implement NAFTA and to extend most-favored nation status to China in the WTO.

“No special deals,” Kasich said, according to The Salem News. “No sweetheart deals, no lobbyists running Ohio, we’re going to run Ohio.”

Again, Ensinger pointed out the obvious, writing: “What Kasich failed to mention, however, is the fact that he does indeed support sweetheart deals, they just happen to be for China, Mexico and other foreign countries full of cheap labor, as Strickland pointed out in one of his first campaign ads.”

“When I heard that Congressman John Kasich voted for all those trade deals that sent Ohio jobs overseas, I just couldn’t believe it,” he says in the blistering 30-second ad. “Kasich voted for [the North American Free Trade Agreement] and even a special trade deal for China.”

Ensinger’s indictment of Kasich took no prisoners. “Kasich, who also served in the lower chamber of Congress before moving on to make millions working for Wall Street, has a long and undistinguished record on trade,” Ensinger explained.

“He voted to grant China permanent most favored nation status, paving the way for its ascension into the World Trade Organization, and drastically increasing trade with the U.S.,” Ensinger continued. “He also supported a free trade agreement with Africa, the Caribbean Trade Partnership Act and the agreements reached at the Uruguay round of global trade negotiations.”

Trump Lays Into Kasich Over Free Trade In The Fourth GOP Debate in Milwaukee on Nov. 11, 2015

Trump tore into Kasich over the Ohio’s support for the Trans-Pacific Partnership, that critics have pejoratively termed “Obama-trade,” playing on the fiasco “Obama-care” has become.

“And in the trade agreement, the TPP, it’s critical to us, not only for economic reasons and for jobs, because there are so many people who are connected to getting jobs because of trade, but it allows us to create not only economy alliances, but also potentially strategic alliances against the Chinese,” Kasich said, finding yet another trade deal with which to fall in love.

“The TPP is horrible deal,” Trump retorted. “It is a deal that is going to lead to nothing but trouble. It’s a deal that was designed for China to come in, as they always do, through the back door and totally take advantage of everyone,” he continued, ripping the TPP apart.

“It’s 5,600 pages long. So complex that nobody has read it. It’s like Obamacare; nobody ever read it. They passed it; nobody read it. And look at mess we have right now. And it will be repealed.” Getting wound up, Trump continued, attacking Kasich without bothering to mention him by name. “But this is one of the worst trade deals,” Trump emphasized.

“And I would, yes, rather not have it. With all of these countries, and all of the bad ones getting advantage and taking advantage of what the good ones would normally get, I’d rather make individual deals with individual countries. We will do much better.”

On March 3, the Cleveland Plain Dealer agreed with Trump, reporting that Ohio lost 112,500 jobs in 2015 resulting from the U.S. trade deficit with TPP countries, citing a study published by the Washington-based Economic Policy Institute, EPI.

Kasich constantly brags about how many thousands of jobs he has created as governor, but what he neglects to point out, much as Obama skirts the same issue, is that the jobs Kasich has created are low-paying, part-time service jobs. These “hamburger flipping” gigs in the Kasich-managed economy in Ohio are beginning to replace the high-paying, full-time jobs Ohio has lost since the passage of NAFTA.

The steel industry, the coal industry, and light-manufacturing – jobs that Ohio was famous for creating until Kasich supported free-trade deals and gave a green light to outsource all these endeavors to low-cost Third World labor centers.

On March 4, the New York Times reported the shift to hospitality workers and service workers away from manufacturing and mining jobs, as well as the shift from full-time employment to part-time employment being experienced nationally under the Obama administration and in Ohio under Kasich.

“Working people in states like Michigan and Ohio feel the lousy manufacturing job loss and growing trade deficit with China, even if Wall Street and D.C. do not,” said Scott Paul, president of the Alliance for American Manufacturing in a statement to the New York Times.

“If you’re wondering why there is so much interest in political insurgencies among both Democrats and Republicans this year, here’s your answer.”

On March 10, the Hamilton Journal-News in Butler County, Ohio, noted that since 1999, median household income in Ohio dropped more than 16 percent when adjusted for inflation — the second-biggest drop in the nation, according to U.S. Census Bureau data.

“Jobs are coming back, but there’s still a great deal to do in terms of strengthening the middle class,” said Bryan Marshall, a political science professor at Miami University.

“There’s a lot of angst and anger among voters about how the promise of the middle class has kind of fallen to the wayside.”