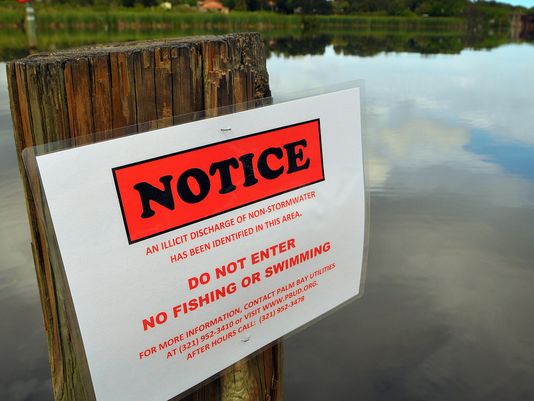 Even as local governments preached better Indian River Lagoon stewardship, utilities spilled millions of gallons of raw or semi-treated sewage into ponds, ditches, canals and tributaries, some of which lead to the ecologically battered lagoon. How much of that wound up in the estuary is unknown. But this year alone, at least 25 million gallons of wastewater was released in the five-county lagoon region, from Volusia through Martin County, according to state data obtained by FLORIDA TODAY.

Almost two thirds of that wastewater flowed into the lagoon between late September and early October, when 16 million gallons of raw sewage and rainwater overflowed after a lift station in Indian Harbour Beach was inundated during heavy rains. Palm Bay sent 5.7 million gallons of partially treated sewage toward the lagoon’s Turkey Creek in a similar incident around the same time.

Utilities often blame storms for sewage spills. But breaks in old pipes, equipment failures and other mishaps that come with aging sewer infrastructure are also among the top causes of spills, a FLORIDA TODAY analysis of state databases and documents found. Utility officials assure that they contain most spills. When sewage does reach the lagoon, they say, it dilutes quickly, and most of the large rain-induced spills can’t be prevented. Nor can scientists point to specific or cumulative sewage spills as the cause of the lagoon’s recent ecological ills. Much more sewage flowed into the lagoon before Florida banned most direct discharges in the 1990s.

Sewage in waterways pose immediate risks to humans because of bacteria and viruses. But the threat to the marine life comes more from the nitrogen and phosphorous the sewage contains. Those “nutrients” can feed algae blooms that can kill off seagrass, which provides vital food and shelter to fish, crabs and other aquatic creatures.

But sewage discharges, both large and small, have contributed to a death-by-1,000-cuts the lagoon has endured for decades. And utility officials say, in many cases, only significantly higher sewer rates can stop all the bleeding of sewage from local systems.

A FLORIDA TODAY analysis of state regulatory documents and databases from the past five years found:

• At least 38 million gallons of sewage or partially treated sewage was released in 221 incidents in Brevard County since 2010, enough to fill more than 2,500 typical 15,000-gallon residential swimming pools. No volume estimate was provided for 21 of the reported spills, so the actual volume is likely higher.

Almost two-thirds of the estimated volume was spilled this year in 51 separate incidents, many caused by the ninth-highest September rainfall on record.

• A third of the 221 spills in Brevard since 2010 were attributed to broken sewer lines, and only 10 percent were attributed to rain, although those were by far the largest spills by volume. Other causes included equipment failure, blockages and releases….MORE HERE.