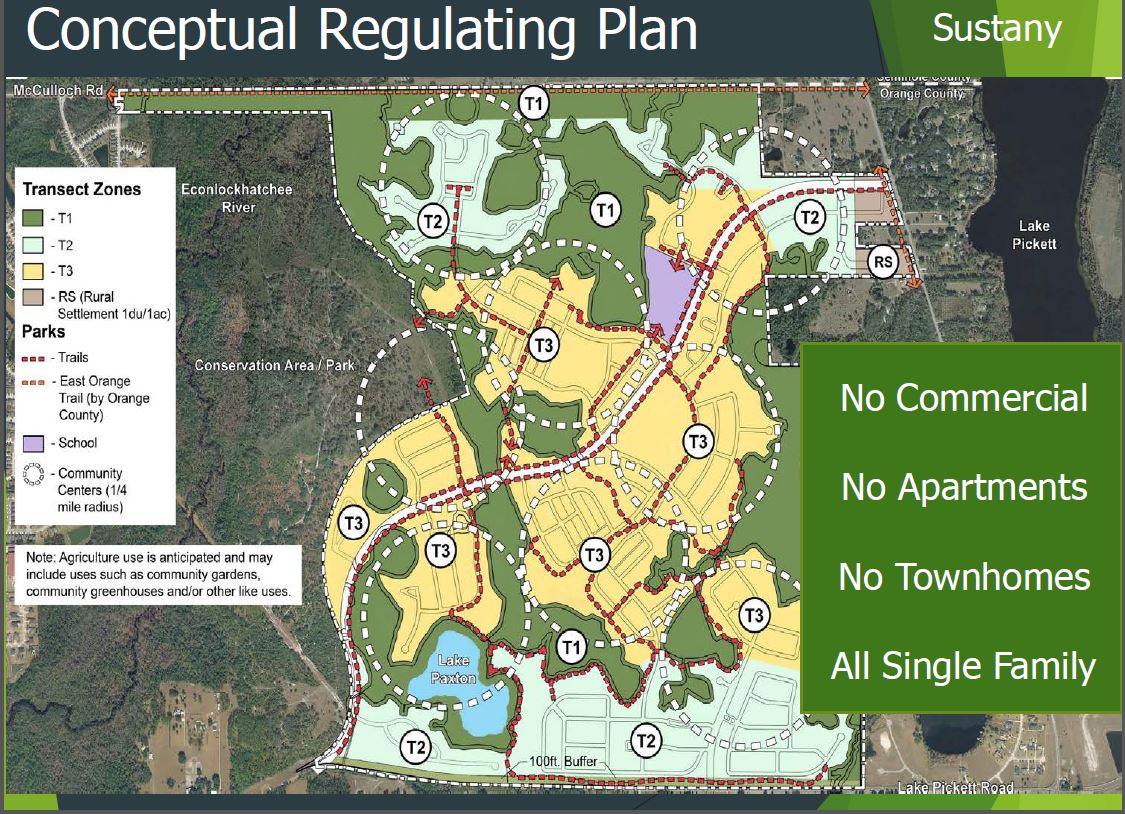 The following is an op-ed from longtime East Orange resident and former City Manager James DeCocq.

It appears the Lake Picket North Project is back. I became aware of this East Orange County project just about this time last year while attending a meeting of the Save Orange County group, concerned citizens against out of control development, where they discussed two major developments proposed along State Road 50 and adjacent points north.

While I liked the design of the Lake Picket South Project, I loved the design of Sustany. As a marine biologist, a City Manager and director of municipal public works projects for over a decade, and special district manager involved with over 150 development projects throughout Florida (most of that time spent fixing design and construction issues, after the fact), I have to say that the concept and Master Plan design of Sustany seems to have everything a concerned citizen could want.

From the onset, I was impressed that Sustany will only be developing on existing pasture land, meaning that houses, roadways, common areas, and every other amenity will only impact already cleared and scarified land. In other words, none of the impressive old growth trees and natural underbrush will be removed for humans.

In fact, Sustany is designed as just about as an environmentally-immersive community that one could possibly create under 21st Century Orange County Code; containing dozens of acres of preserve lands and lakes, miles of walking trails, massive open space including naturalistic active and passive parks, an educational Nature Center, native landscaping throughout, and huge buffers and setbacks to provide for separation from natural areas of concern and existing neighbors.

But more important than immersion and education, is conservation. One of the major local arguments against Sustany is impact from unit density. Granted, Sustany is around 1.4 units per acre, which is greater than the opposition would like, however, when looking at a development map of the surrounding area, the project doesn’t really appear to sit in a truly “Rural Area”.

In fact, Sustany is apparently surrounded by thousands of homes that sit on one-half acre or less, most seemingly being one-quarter acre or smaller. This means that Sustany would provide much less dense housing in the middle of 2 to 4 unit per acre existing density.

In addition, Sustany would concentrate housing in existing open space leaving acres upon acres of contiguous preserve land for nature to continue to thrive, as opposed to cookie cut clearing individual lots in a piecemeal manner like in the surrounding single family home areas.

Another hit against Sustany is the density, residents opposing the Lake Picket North Project have argued all of the additional housing will negatively impact the Econlachatchee River. This is actually more likely to occur with fewer houses, being more spread out.

Ultra-low- density housing can actually be worse for the environment, because most, if not all, communities developed on 1 acre or larger sites utilize well and septic systems.

Not only have recent studies linked leaky septic tanks to St. Lucie River contamination, but in fact, septic systems are designed to leach waste water back into the ground – waste water that contains e. coli bacteria and other contagions, which can easily, and most likely due to proximity would, make their way not only into the Econ water system, but into rural drinking water, which is dangerous to the environment, livestock, and human beings.

I experienced the negative impacts of septic systems firsthand as City Manager of the City of Marathon in the Florida Keys. Even with attempts to reduce home densities by regulating that every new home built required the removal of two existing homes, the fact still remained that almost daily these septic systems were flushed into Florida Bay and out into the Atlantic Ocean, impacting seagrass, reefs, and all the life they support.

Eventually, the scientists behind the Florida Keys Area of State Critical Concern determined that it would be best to take all of the thousands of available housing units for all of the Florida Keys and locate them in the City of Marathon, but requiring a sanitary sewer system to not only eliminate this ground contamination locally, but throughout the entire chain of islands, improving water quality in Florida Bay and along the Atlantic side of the South Florida.

It would seem with the recent problems experienced in Central Florida waterways, the same logic would apply; concentrate the available housing, and properly and safely dispose of waste. To this point, Sustany is designed to the Econ Ordinance and the Florida Green Building Coalition Standards, and will contain central water, sanitary sewer, and reuse water systems.

One final comment on Sustany density. Opponents, and even would-be supporters, have stated publicly that they would support Sustany if the density was reduced. Unfortunately, this is not a possibility, as Orange County Planning is apparently actually requiring the present proposed density for the project to be transmitted.

So, even if Sustany wanted to accommodate such a request, it would end all possibility to have what to me seems to be one of the best, most environmentally-conscience, development options for this tract of land in East Orange County. The second and possibly greater argument against Sustany is the anticipated traffic impacts and required widening of rural secondary roads.

Anyone who has travelled even a few times during the wrong time on E. Colonial Drive east of Alafaya Trail knows the gridlock that can, and most often does occur. There is no denying the problem, however, Orange County Planning has stated on numerous occasions that these roadways are presently at a D Rating for transportation and without widening and additional lanes, would soon become an F, to which I have witnessed standing ovations from local residents and opponents to the Lake Picket North and South projects.

Believe it or not, people actually applauded their own failing roads.

Now, I completely understand and support the want to preserve one’s desired rural lifestyle, the deep- rooted need to protect what lifestyle one wants, enjoys, and worked so hard to obtain. The real issue, however, is that during the Orange County Transmittal Meeting last year, County Planning Personnel publicly stated very plainly that even with the improvements presently occurring on State Road 50, the major east-west thoroughfare, and even without the additional traffic created by Sustany and The Grow, secondary backroads must be widened and improved as well.

This is simply because decades ago planning did not take into consideration that there would only be a single major road to carry the tens of thousands of daily trips required to and from East Orange County.

Put simply, the reality is that most, if not all, major secondary roads, the very same roads that local residents are fighting to preserve as two-lane rural roads, will have to be widened and improved in the future, with or without Sustany.

While hardly ever consciously recognized, traffic congestion is a degradation of quality of life.

Or, would the County rather take advantage of the over $100 million provided by the developers and dedicated to such required road improvements, resulting in a traffic capacity solution that actually provides greater capacity than will be used for the project, helping to alleviate present and future issues, and save present and future money spent on the exact same end result?

The choice is clear… Orange County should vote to transmit the Lake Pickett properties.

James D. DeCocq has been a resident of East Orange County for over a decade. He has a BS in Marine Science and Biology and an MA in Marine Affairs and Policy. He has served as a City Manager is three newly incorporated South Florida coastal cities where he continuously lowered taxes while expanding municipal services, and has managed and consulted on hundreds of develop projects throughout Florida, helping prevent and rectify numerous and serious environmental, transportation, and quality of life issues. Mr. DeCocq is considered a government efficiency expert, and consults throughout the United States in both a public and private capacity for both government and major corporations.