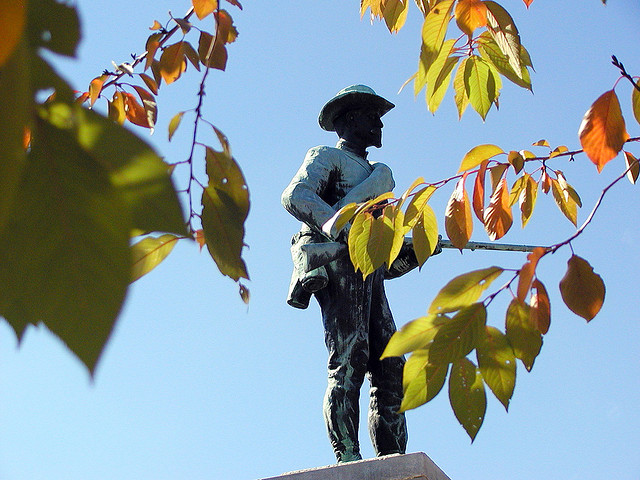 “Old Joe” was dedicated in 1904 and paid for with funds donated by several Southern heritage groups including the United Daughters of the Confederacy.

A controversial effort by a small group of African American residents to remove a longstanding Confederate War memorial in downtown Gainesville is getting significant push-back from Alachua voters.

Alachua, a longtime bastion of liberal thinking, mostly due to the presence of the University of Florida, is hardly the place you would expect nearly 90% of the voters to be in favor of keeping “Old Joe,” the statue in the middle of the fight.

On one side, the Save Southern Heritage Florida, the preeminent organization in Florida for saving Confederate and Veteran’s memorials and monuments, is facing off against a small group of African American residents that want the statue torn down and removed.

SSHF recently commissioned a survey to gauge the pulse of the voters in the County. Surprisingly to some, the survey showed overwhelming support for keeping the Confederate monument.

The opinion poll, conducted on March 13 – 14, 2017 of a demographically accurate sample of an appropriate number of voters, also spoke clearly that taxpayer funds should NOT be spent to move it.

“More than two out of three voters supported keeping the statue, and 9 out of 10 didn’t want tax dollars used to move it” according to David McCallister, Save Southern Heritage – Florida spokesman.

“The Historical Commission spoke, the Veterans Advisory Board spoke and now the people have spoken.  It’s time for the Commission to do the right thing and stop talking about moving this memorial to our Alachua County Veterans”.

Alachua got caught up, along with many Southern states of the Old Confederacy and major cities within those states, in the recent anti-veteran effort that began after a random shooting in South Carolina of African American parishioners in a Charleston Church.

The resulting hue and cry from many of the left to remove all things Confederate has resonated in many communities. On the other side are preservationists, veterans groups and Confederate heritage groups, including the SSHF.

Many Southern cities erected monuments to the graves of the glorious dead in the years following the South’s defeat. Orlando has a similar statue at Lake Eola, dedicated by the City on land donated by one of Orlando’s most prominent settlers, Jacob Summerlin.

The Alachua battle has continued to fester with the battle lines clearly drawn at this point. The County Commission will make a determination in the very near future of the fate of “Old Joe.”

The survey produced the following results: The precisely worded poll asked voters if they agreed or disagreed with the two County advisory boards’ recommendation to the County Commission to keep the Veteran’s memorial in place.  70% disagree with moving the statue. A second question asked if the voter favored the expenditure of the estimated $36,000 in tax dollars for removal.  88.9% opposed that expenditure.

“The voters don’t want it moved and sure aren’t willing to pay for it” McCallister added.