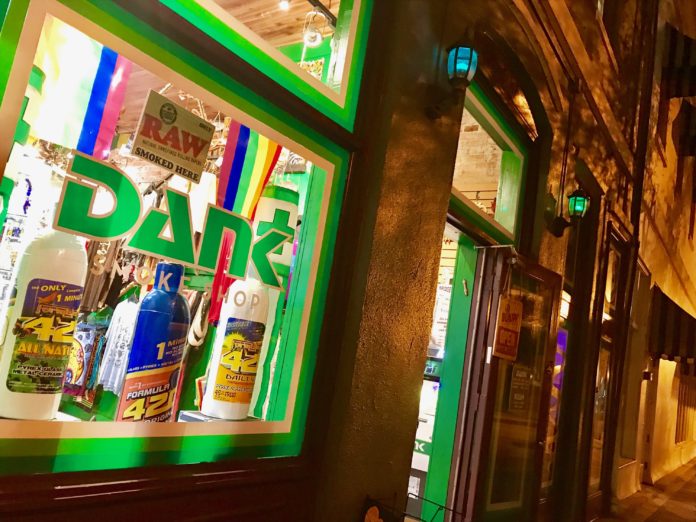 Piff. Crippy. Skunk. So many words have come and gone in the weed world, and it’s hard to keep up with trends.

When invested in a business, any owner hopes for longevity, and your name is everything. When Orlando’s Katmandu decided to make a name change they chose a timeless one, Dank.

Located in downtown off of Court, Dank has glassware for miles. Large water pipes, vaporizers, little (tobacco) pipes, they’ve got it all. Dank isn’t limited to the smoking world though, not even close.

International clothing, cultural items such as singing bowls, art, Hindi god statues and much more are all up for sale.The staff is especially friendly, and they’re more than welcoming when it comes to questions.

Along with the grand renaming, the people at Dank expanded their goodness to the space upstairs. Instead of more store space, however, the 2nd floor is a full-fledged nightclub / hookah lounge known as (again, timeless) Kush.

An alcohol bar, along with Oxygen and Hookah bars, are all available in one very convenient upstairs room.

There’s a very exclusive feeling at Kush, as if you’re in some downtown loft party in New York.Cushy sofas, neon lights, and smooth curtains all compliment the intimate art pieces, which line the walls.

The room has a great sound system, but you can still hear the person next to you – always a plus.

The folding board outside of Dank shows a big green plus sign, which certainly gives the feel of a medicinal store. Hopefully Florida lawmakers will get their act together and quit trying to place silly sanctions, like the vaping only clause, on our state’s support for medicinal.

Wouldn’t it be nice if we lived in a place where the will of the people was acted upon once clearly reflected?

Granted the privatized prison industry may take a hit as a result, but hey fuck it, lets take a chance and see if not giving people a criminal record for a plant does any good for society. I think it will.

*Any seemingly implied references are done simply in taste of good writing, and do not represent Dank or Kush in anyway.