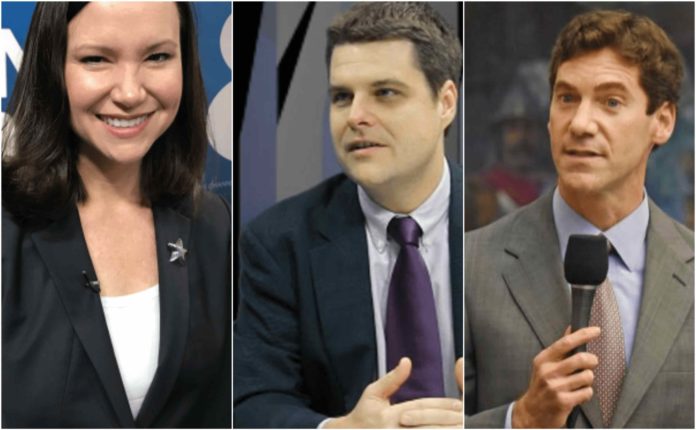 Moody surprises with July fundraising reports, Fant fizzles, and Matt Gaetz could be the game changer.

The Central Florida Post is offering periodic analysis in to the current state of key races in Florida.  It is always wise to offer a caveat that in Florida, things can change in a hurry.

Rick Scott was on nobody’s list to be the next governor in 2009, but by the time 2010 was over, he was in the governor’s mansion.

The idea is to get a current idea of where things are heading, and to offer a guess as to who a late second entry that could dominate the race (like Scott did).

We will profile the two announced serious GOP candidates and offer an X-factor candidate — the candidate who, if he chose to run, would immediately rocket to the top of the pack of contenders.

There are two candidates in the race now:

Ashley Moody, who until months ago was a circuit court judge in Hillsborough County, and State Representative Jay Fant, who currently serves in Jacksonville. Our 900-pound gorilla candidate is US Congressman Matt Gaetz.

The Leading Contender is… Ashley Moody

A young, attractive Tampa resident with a background in law enforcement is currently the state’s attorney general, and Moody would fit the bill here as well. In fact, Moody is actually a more attractive candidate because she has an established family.

She worked for a prestigious law firm, Holland & Knight, and served as an assistant US attorney before getting elected circuit court judge in Hillsborough County at the age of 31, making her the then youngest judge in Florida.  Her father is a federal judge and her husband is a federal agent. She is the mother of two sons.

Moody’s biggest coup of all, though, is getting the coveted endorsement of Pam Bondi out of the gate. This will help her flesh out her donor base and get to know the donors of the Republican Attorney General folks. Bondi’s closeness with Governor Rick Scott and President Donald Trump will only help.

Moody earned respect statewide for her handling of her first campaign challenge when the mainstream media revealed that her family had been involved in a lawsuit with President Trump’s company over a building that was never built in Tampa.

To Moody’s credit, she was able to make it through unscathed by expressing her continued support for President Trump.

Moody is being advised by campaign veteran Marc Reichelderfer.

Representative Jay Fant has a reputation for being a decent guy, always in the wrong place at the wrong time politically.

He defeated Paul Renner in a Republican Primary for a state house seat in 2014 by two votes, only to have Renner come back in a special election a few months later. Renner was chosen to be the speaker of the house for the 2023 and 2024 sessions by his classmates last week in Orlando.

Fant supported Eric Eisnaugle for House Speaker in 2021 and 2022. Eisnaugle initially won unanimous support, before having a majority of the class rebel and choose Chris Sprowls, leaving Fant on the outside. Eisnaugle was appointed to the 5th District Court of Appeals on the last day of the 2017 regular session, leaving Fant with a small number of former Eisnaugle supporters willing to support him in his statewide race.

Fant’s bad luck doesn’t stop there.  Per Florida Politics, Mayor Lenny Curry, the most dominant political figure in North Florida these days, did not take kindly to Fant’s criticism of him during a speech.

Now don’t get me wrong… Fant is a State Representative, he has the photogenic look of an Attorney General and he’s rich, so you’d be a fool to count him out. But as of now, Fant comes out of the starting block with a decided lack of momentum in terms of endorsements, no particular respect from his chamber’s legislative leaders, and a mayor who won’t help him.

Not surprisingly, his fundraising, as Florida Politics points out, was/is lousy.

There have been some whispers that panhandle Congressman Matt Gaetz is being recruited/encouraged to run by some of the state’s biggest players. If Gaetz were to jump in, he would immediately jump to the front of the line of frontrunners.

Nobody runs to the right of Matt Gaetz in the state of Florida.

1) Guns – Gaetz was one of the most loyal supporters of the 2nd Amendment and the NRA Tallahassee has seen in decades. He passed a bill allowing local government officials to be sued if they fail to obey state laws on firearms. As house criminal justice chair, he famously stated that he wouldn’t change “one damn comma” on the state’s Stand Your Ground laws.

2) Sexual Predators & The Death Penalty – Gaetz’s work on both these issues as House Criminal Justice chair provide a ready made campaign plan.  He was often described as one of the state’s most conservative legislators, and he’s been a staple at Trump rallies where he introduces the President with a Baptist preacher’s vigor.

3) Family Wealth & Fundraising Expertise – The Gaetz’s have a lot of money. By all appearances, a lot more than the Fant family. If they wanted to, they could put seven figures on the board in a hurry, and Gaetz has earned a reputation as one of the most dogged fundraisers in Tallahassee.

4) Marijuana & Animals – Gaetz is the father of the state’s first medical marijuana law. He has also been a nationally recognized defender of animals and wildlife, offering two outstanding crossover issues for a candidate with extraordinary conservative bona fides.

The Gaetz equation looks something like this: The NRA + The Florida Medical Association + The Florida Chamber + a sitting US Congressman who almost certainly has the highest statewide name ID today + Family Money + Tremendous Fundraising Skills… this EQUALS?

Almost certainly the state’s next attorney general, if he were to leave congress.

To be clear, there is no suggestion that Gaetz is planning to leave congress. He is, by all appearances, a highly sought after and respected conservative voice in the nation’s capitol.

Gaetz made the decision to leave Tallahassee for DC, so maybe he’s had a change of heart and will come home to make interesting a race that looks like it could be a snoozer.

If Gaetz runs, he wins, but if not, this race is Moody’s in a walk.