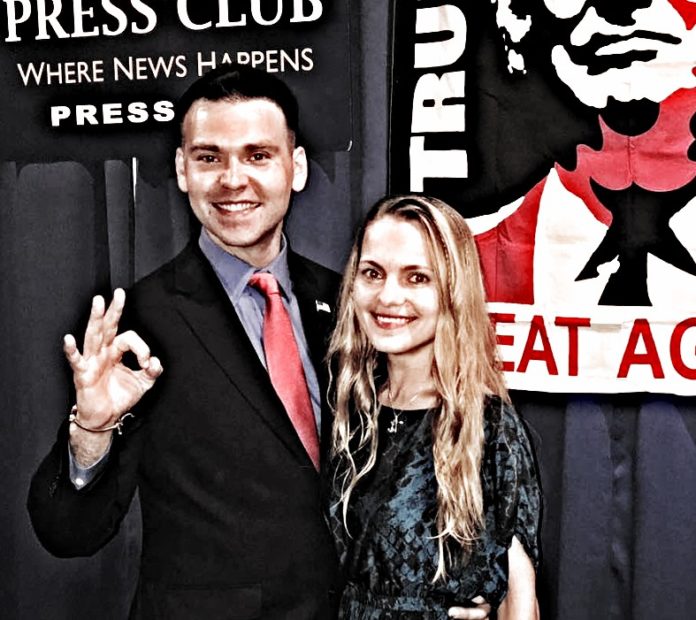 Jack Posobiec has emerged as a key part of the alternative media attack on the traitorous mainstream media.

As most, I have spent the last few weeks gearing up for the premiere of Game of Thrones.

Part of that prep has been reading Citizens for Trump by Jack Posobiec, a quick and immersive account of the Trump revolution. Trump’s victory defied all odds and reset expectations, just as the great George R.R. Martin does with his tomes of loyalty/death/rebirth.

Our Q&A with Mr. Posobiec is below… who is he? What motivates him? And if modern political figures had to be compared to a character from GOT… who would they be?

1). Evangelize for a moment. Introduce us to Jack Posobiec…

Sure. So I’ve been involved in politics since about 2004, during the presidential election with George W. Bush. That was when I was in college at Temple University in Philadelphia, where I got involved with the College Republicans.

I remember thinking to myself while I was attending classes, ‘man, I thought hippies went extinct in the 1970s? But what is all of this coming from my teachers?’

And I’d see all the students nodding in agreement with some of the ridiculous things being said. I remember thinking, ‘wait a second, this is opinion. This teacher isn’t stating facts. They’re stating one side of the argument and preaching opinion as fact.’

So I thought, ‘well, someone’s gotta do something about this.’

So I did what any student would do, and I sued them. Because Temple University is partially public-funded by the State of Pennsylvania, I actually called up David Horowitz and we started a chapter of the Students for Academic Freedom on Temple University’s campus.

We held hearings where we required that specific teachers testify, we brought in the state legislature and came in and collected testimony from students all across campus.

We asked students on the left and right: Were your teachers bringing politics into the curriculum? Were they making that part of the class? And if they were, were they presenting both sides or was it biased one way or the other?

Really long answer, but it’s a fun story. That was how I got my start. I eventually became chairman of the College Republicans at Temple University, and then served as executive director of College Republicans for the whole state of Pennsylvania, which covered more than one hundred campuses. And through all of that, I just became really invigorated in doing something about politics and not just complaining about it.

Around the same time, I got an internship with Senator Rick Santorum’s office and got a job on his campaign in 2006.

I was a long-term Santorum guy. I was there when he put out his book, It Takes A Family, playing off Hillary Clinton’s infamous It Takes A Village. It’s a great book. I’ll still pull it off the shelf every once in awhile and thumb through it and just think, man, he just nailed it. He completely nailed it over ten years ago about all of the issues in our society and how they could have been solved by just reinvigorating families and emphasizing the traditional family.

We have this unit that as a civilization has sustained us for thousands and thousands of years, so maybe we should make sure we’re doing everything we can as a society to support that unit rather than create artificial units or have government come in and play the father figure, like we’re seeing happen so often, especially in inner cities, which is incredibly detrimental. We’ve tried these new things for 50 years and look what’s happened.

I went on to help out a little bit on his presidential runs, helped with the writing and research for his book, Blue Collar Conservative. Interestingly enough, that book was handed to Donald Trump at one point, and Trump called Rick Santorum to Trump Tower to discuss it.

Trump asked Santorum: What is this? What is this book about? And the Senator told him, ‘this is the book that lays out the blueprint for how a Republican can win a presidential race by focusing on working class families.’

After working in politics for a few campaigns, I ended up moving to China for 2 years and working the US Chamber of Commerce in Shanghai and learned to speak fluent Mandarin. I also spent 7 years in the Navy Reserves, with multiple overseas deployments and one year-long deployment to Guantanamo Bay in the interrogation cell.

I worked out a deal where I had one deployment I had to finish with the Navy. I was actually overseas up until May 2016, and, you know, I was able to do what I could online. And that’s kind of the reason I didn’t go work for the Trump campaign originally. I was scheduled for a deployment and obviously couldn’t get out of it. I asked, ‘can I volunteer online?’ They said sure, it’s your spare time, go do what you do. So I said fine.

And then fast forward to the end of May, I get home, and I switched over to the reserve side in the Navy, and I found this organization, Citizens for Trump, which had been founded by Tim Selaty and a few other people around the country — Wayne Dupree was involved, and Roger Stone. And they were looking for someone to help them with events, help them with security, help them with other special projects, and I said, ‘hey, I’m your guy.’

So I ended up being a special projects director for Citizens for Trump. We were the largest grassroots organization in the entire country. We focused on key swing states, and I got to travel to Florida, Ohio, Pennsylvania, Virginia, California, just everywhere, in support of this candidacy. Obviously I spent most of my time in Pennsylvania being a Philly kid. And just turning that power of social media — using my experience with ground campaigns and field strategy and combining that with the reach of social media — is where we found that ability to thread the needle and win campaigns and turn a hashtag into votes.

3). It’s no secret that you are a big Game of Thrones fan. Any parallels/similarities between GOT and the 2016 election?

I always say if you want to understand politics these days you have to read the books at least twice – and I’ve read them 5 times!

The way the different families on GoT vie and plot against each other on the show, well that’s very similar to Team Trump and Team Clinton these days, only a lot more civil, hopefully.

5). Tell us about your book, Citizens for Trump.

My book, Citizens for Trump, is not about Donald Trump. Its about the people that came together and elected him. I would say for the Trump movement, in general, this is actually something we’ve recognized as a deficiency that we’d like to correct.

So the Trump movement is very much a populist movement. In the book, I go back and draw out how American politics has always been about populism all the way back to the revolution. We saw little swells of it with the Whiskey Rebellion. There’s also the actual populist party, the Bull Moose party, etc. all through Pat Buchanan, Ross Perot, and Donald Trump.

That’s why people will look to the National Review’s of the world and say, ‘you know, you’ve written some great articles, but what have you conserved over the years? What have you done to actually win the fight? Show me your victories.’ Oh, we got this guy elected, that guy elected. I don’t care who you got elected. Show me what you’ve conserved.

People are realizing that, not just our civil liberties, but our culture is changing, our demographics are shifting, America itself is changing, and people are stepping back and saying, ‘is this okay or do we want to correct the course?’

I think that’s what brought together the broad coalition that elected Donald Trump.

I know that it wasn’t a perfect electoral win, and there were missteps and gaffes and mistakes, but we pulled it off because we focused on borders, language, and culture — maybe not language so much, but certainly anti-political correctness — so language in that sense, not in the sense of speaking English, but language in the sense of the language police and the Orwellian idea of what words we use.

The book breaks all that down, and more, plus showing a behind-the-scenes look at many of the campaign moments like MAGA3X, the GOP Coup when Ryan attempted to get Trump to drop out and name Pence the nominee, and gets into the start of Antifa with their riots outside the Deploraball.

I also go through each of the primary candidates and how people gravitated to Trump over them, and go through Hillary’s health in great detail. There is also an entire chapter on Kekistan.

*I’m sober, so I’d say it was Wawa coffee that got me through the race.

You can purchase Jack’s book by clicking here. We will be posting our review of Citizens for Trump from the persepctive of a Trump loyalist and Sanders socialist in the next few days!