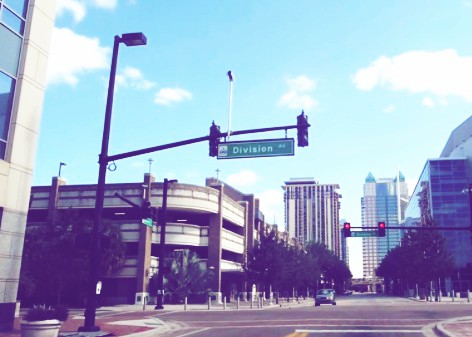 The name is a morbid relic. It sucks to think about, but it’s the truth. That streets given name was a warning, and one that needs to be forgotten.

I was working a crummy door job, knocking all-day and well into the humid night. It was Summer time in Florida. The blazing days made warm heads warmer, but it’s the humidity that pulls a person’s soul. Each step gets sweatier, draining a little more out until you’re longing to be carried home by anyone, whomever they may be, like a child with no pretense; welcomes without worries.

The van dropped me off on 18th and Parramore, and, as you may have understood, with numbers for street names this is a lower income African American neighborhood. Families were grilling and playing cards outside.

Most windows had protecting rods. The corner stop sign, with only the bottom bolt, was hanging barely but refusing to touch the ground.  I was black, everyone else was white; or at least that’s how I felt, though it wasn’t true at all. Despite this, nothing noteworthy happened.

Some, as we spoke, warned to be careful. But again, as mentioned, there was nothing worth mention.

Save for one encounter, though the media would never have it, a conversation with Mr. Craft.

Mr. Craft was tall and skinny, but there was some muscle built in as well. Patches of gray stuck out in his beard, and little drops of sweat gathered on their tips. Though Mr. Craft’s eyes were baggy, his high cheekbones helped his eyes to seemingly always smile.

After talking about the upcoming football season, and music we both liked, he offered me some water, as well as a seat on his porch. We sat under the shade, and we shared it all together. It was our respite from heat, and the unbiased warmth.

“We all suffer under the same sun” he said after he passed me a cold bottle of water. “And this humidity could drown everybody”

“I’ve lived here all my life, my mother too, all eighty-five years right down the way there….Fifty-seven myself” A smile came across his face “and year after year, sure enough, everyone says ‘it’s hot'”

After a short moment, and a long drawn “yeeaaaah”, in the noblest of ways, though calloused as it were, Mr. Craft on spoke.

“Used to couldn’t go past that road just a little ways over there” Mr. Craft pointed east.

Words affect our world in every way, but most of all our collective consciousness – where do we want to go?   Attitude is altitude; mind over matter, there’s a reason these sayings have stuck around. Whether you’re Christian, or Hindu, or follow no god at all, each of us knows that Division shouldn’t be a defining word.

Just as Mr. Craft told me, Division Ave is where African-Americans couldn’t pass after nightfall, otherwise they’d be given trouble. Trouble means hanging. I mean, let’s take an honest look at this. A rope would tighten until it cut into a bleeding throat. Gagging and heaving, their capillaries would burst among a sea of cheers.

The name is a morbid relic of these days. It sucks to think about, but it’s the truth. That streets given name was a warning, and one that needs to be forgotten.

I’m not the first person to write about this, but still I feel this needs to be written. I give all of my respects to those who have worked, and written, against this street name over the years. Still, the name remains. A number of excuses have been made in what has literally become decades, and I don’t understand why.

One of the long given reasons that has “caused” a delay is the concern over what the new name should be. Who cares? The issue is the name that’s already there. Vision Ave, Cornel West Ave, Forward Ave, it’s not difficult to beat a word like division. Let’s get to it.

Some like to say renaming the sign would be erasing history – ridiculous. The street name, unlike the Johnny Reb statue, isn’t a memorial. There is no reverence in its name. While there was no Johnny Reb, there especially wasn’t a Johnny Division.

After Pulse, some of the groups who have been pushing for a renaming stalled their efforts to allow the city to focus. I don’t want to knock these sentiments in any way. I understand these feelings are solely manifested from humility, but I respectfully believe that they’re a massive contradiction.

I was born in Orlando. People from my high school were at Pulse that night, neighbors as well. It’s the single greatest tragedy that has ever occurred in this city, period… but do we really believe it does any justice, or that a single one of those souls would want any iota of progress to pause with their passing?

Truthfully, I think they’d say we should get a move on.

Maybe I’m just a disenfranchised white, heterosexual male who grew up out in the boonies off Chuluota…but I really feel that our city would be better off without any Division – Friendship, love, street signs. It’s a bad street name. It’s a torn up pair of boots that didn’t fit to begin with, and desperately need to be thrown out lest the stink up the whole hallway.

If we truly are a city that wants to exemplify progress, love and strength, Mayor Buddy Dyer, with his given authority, needs to enact a plan for replacing these street signs immediately.

Born and raised in Orlando, and Socialist to the core, Patrick Jude graduated from The University Of Central Florida in 2015. He currently holds a B.A. in English Literature, as well as an A.A. in Jazz Performance from Valencia College. Jude is heavily tattooed, abstains from alcohol and is an avid Packers fan.