How will the Florida Congressman turned gubernatorial candidate explain this stance to GOP primary voters?

In a statewide Florida Republican primary, the issue of illegal immigration is one of the most important concerns for GOP primary voters, running neck and neck with protecting our Second Amendment rights.

For conservative Republicans, who dominate the GOP primary, illegal immigration is less about cultural differences and more about plain ole fairness and security. President Trump has made this his signature issue and he is working to seal our borders.

According to votes reviewed by the Central Florida Post, Republican gubernatorial candidate Ron DeSantis could find himself in hot water with the very voters he needs to secure the nomination.

The Washington Examiner reported in 2016 that illegal immigrants collect anywhere from $1.4 to $2.1 billion worth of food stamps and SNAP benefits annually, while American citizens in need are pushed to the back of the line.

“This looks very much like a billion-a-year problem, and all totally unnecessary,” David North of the Center of Immigration Studies wrote in the report titled, “An Aid Program that Routinely Discriminates in Favor of Ineligible Aliens.’

How can Ron DeSantis expect Republican primary voters to take his candidacy seriously when he voted against a resolution on the floors of congress that could have saved us up to $2.1 billion annually? More so, how does he explain his prioritization of illegal immigrants over his fellow American?

Nate Madden of the Conservative Review, who reviewed the same report from CIS, described the program that DeSantis supported as “clear-cut discrimination against citizens.”

Look, we do not have a personal bone to pick with Congressman DeSantis, but the proof is in the pudding. He had an opportunity to cut government waste, prioritize citizens over illegals, and reform one of the nation’s most abused welfare programs… yet he did nothing.

Just last week he was exposed by Politico, for moving to a posh luxury beach condo owned by two defense contractors who have showered Ron’s campaign with $70,000 in cash, while spending $700,000 a year to lobby Ron and his friends in Congress.

For a guy who says he wants to drain the swamp, Ron DeSantis’s campaign is funded by swamp dwellers.

To become Governor, DeSantis must win the GOP primary… and these revelations can only hurt him among the Republican faithful he must court. 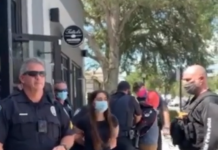