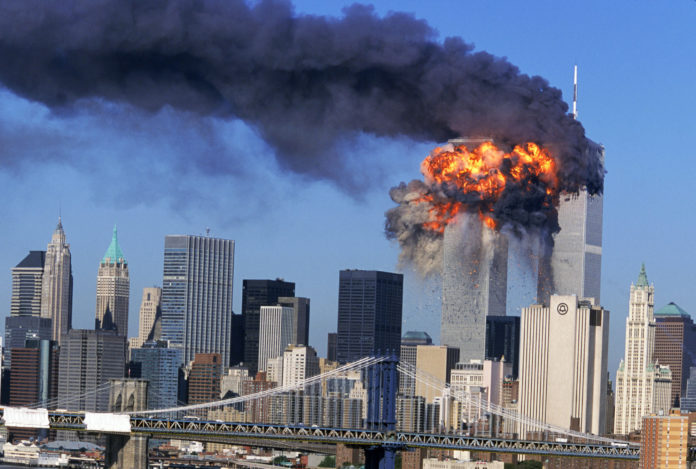 Today, on this day of remembrance, I encourage you all to take a moment and remember all those that we lost, all that we’ve lost ever, and be grateful for all that we still have.

Seventeen years ago, I had just returned from the college dining room to my dorm room to get ready for class. It seemed like a normal day, nothing particularly special or out of the ordinary. I sat down at my desk to put things in my bag for my classes that day and then went online to talk with some friends until it was time to leave.

As my friends and I talked about everything and nothing, one of them interrupted the conversation and said a plane just hit the Twin Towers. At first, none of us believe him and then another person said it’s true it’s, it’s true. Not having a TV in my dorm room, I ran out to the dorm’s lobby and everyone was frozen where they stood watching the events unfold.

At first, like everyone else I wanted to believe it was just a horrible accident; this was a tragic accident; a plane malfunction, adverse weather effects, or maybe something happened to the pilot’s health. I thought to myself, “Come on. We live in America. The safest and most powerful country on Earth. There’s no way this is anything but an accident.” Then the second plane hit the other tower. A third hit the Pentagon. And a fourth crashed in a field in Pennsylvania. The cold realization of the reality of it all washed over me and began setting in.

That was a day that not only America changed but the world changed. I finally understood how my grandparents’ generation felt the day Pearl Harbor was attacked. September 11th became the day that would reshape my entire generation and the world forever. My generation lost its innocence and the generation after has never had it due to the conflict and loss we’ve had since. Our world is now one of “terror threat levels”, TSA security, and skewed sound bites on the nightly news regarding the most recent threat to national security.

With each election, the long shadow of the September 11th attacks looms and it is impossible to ignore the impact it has had on both parties to this day. Whether it’s calls to ban visitors/immigrants from certain countries to the dissecting of the Muslim religion, both parties have had to continuously address the fallout from the attacks. No matter what a candidate’s stance on an issue connected with September 11th, there is no “safe ground” that even comes close to appeasing everyone, not even a political party’s base. Who would have ever thought that one of the most lasting scars from the attack would be political?

I’ll be taking a moment today, probably lots of them, to think and reflect on what’s happened in this country and the world in the years that followed the attacks. Remembering those that we’ve lost in the attacks and lost in the conflict since then. I will also think of the students I teach every day. The students who don’t know of a world before September 11th. The generation that is now in school does not get the benefit of living carefree in the world and society where everything is always good. This experience, this privilege of childhood, was taken away before they even were alive.

Today, on this day of remembrance, I encourage you all to take a moment and remember all those that we lost, all that we’ve lost ever, and be grateful for all that we still have. We have come so far since September 11th 2001 as a country, but we still have far to go to ensure that our children and future generations can have a childhood like we did. One where a child can be innocent, have fun, and just enjoy life.

Ed Young holds a Bachelors is Communication from Flagler College and a Masters in Education from Stetson University and has worked as a teacher in public and private schools in Central Florida for the last fourteen years. The study of history and politics, both local and national, is a personal interest of his. He is a longtime Seminole County resident, financial conservative, and advocate for conserving Florida’s natural resources. He currently serves as the Vice Chair for the Seminole County Soil & Water Conservation District where he represents Group 4.