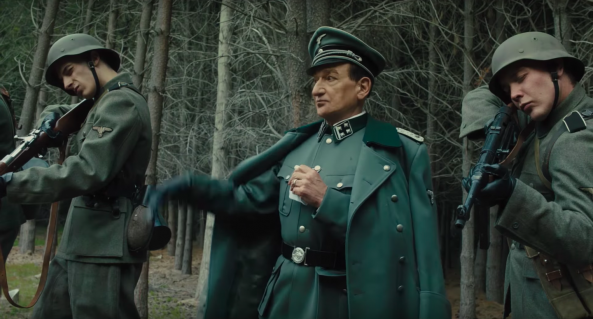 In the 1960s, there was one elusive German Nazi leader who had evaded capture and justice.  Adolf Eichmann was seen as the “architect” of the Holocaust, serving as the logistics coordinator for the genocide of millions.  Eichmann defended his war crimes by stating he was ordered by the Director of the Reich Main Security Officer, and the main architect of the Holocaust, Reinhard Heydrich.  Director Heydrich was assassinated by Czech Rebels.

Less of the movie is about the actual capture, itself a swift operation.  Instead, the movie focuses on the period of time in which the Mossad was holding Eichmann while they awaited extraction.  The story acts as in many ways as a mini-tribunal, with us, the audience, serving as the judge.

Each Mossad agent had family members lost in the Holocaust, and each reacted to their duty to capture Eichmann alive in different ways, ranging from a desire to disobey and murder the “monster”, to calm, compassionate interrogation.

During his time in capture, Eichmann acted with Stoic calm, concerned more for his own family, who continue spreading Nazi antisemitism in a post-revolutionary Argentina.  Eichmann details his own legacy as he views it, an alternate perception of the truth.

For Eichmann, his concern is the truth of his legacy, as he sees it.  Eichmann saw himself as a sympathetic soldier who was duty-bound to protect his nation.  This echoed his defense during trial, in which he stated that “I was not a responsible leader, and as such do not feel myself guilty.”

The movie successfully connects you emotionally not just to the Mossad agents, but to Eichmann himself.  During interrogation with Officer Malkin, Eichmann shows empathy towards his victims. He detailed his work to evacuate Jews in a Schindler-esque covert operation, and seemed to show, in his own way, shame.

Most of what Eichmann details is historically accurate, though obviously twisted by the delusions of a war criminal.  It is true that Eichmann was an operational figure, but the policies came from his superiors, primarily from Heinrich Himmler, Reichsfuhrer of the SS.

It is also true that Eichmann ran a side operation to evacuate tens of thousands of Hungarian Jews, but it was less sympathetic and more strategic.  Eichmann worked with Joel Brand of the Relief and Rescue Committee to allow for the exportation of Hungarian Jews in exchange for military equipment, which Brand would later depict as “blood for goods.”

Operation Finale does take some liberties in its storytelling, and certainly does not reach the bar one finds with Schindler’s List and Munich, but the movie details the human side behind one of the most important trials of that century.  The gravity of the operation was properly depicted by Israeli Prime Minister David Ben Gurion, where he gave a powerful and emotional monologue to the Mossad agents.