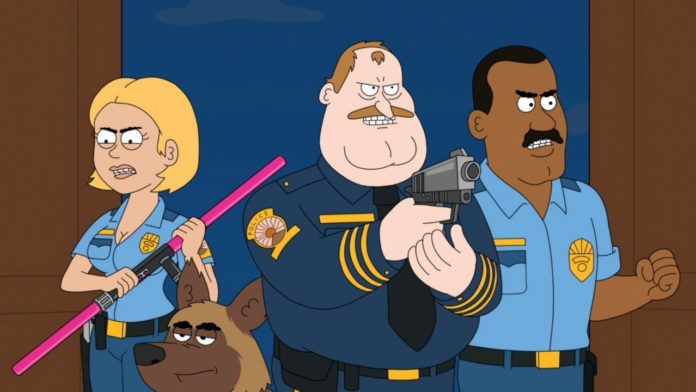 The show fails the worse at playing the storyline it is trying to satire—the son of a hero cop who wants nothing more to be just like his dad.

If you were hoping for a humorous satire of police procedurals, then Paradise PD will surely be a disappointment.  The “comedy” attempts to be a mix of Family Guy and Beevus and Butthead and being terrible at both.

Paradise PD came from the creators of the failed Brickleberry show, and it makes a poor attempt at being raunchy but comes off as completely embarrassing.

The show depicts Kevin, a stereotypical bumbling wannabe-cop who is made an officer by his mom, the Mayor of Paradise, after his father and the Mayor’s ex-wife, the drunkard tough-as-nails police chief played by an actor whose other tough-as-nails roles include Spongebob Squarepants.

The show seems to be attempting everything and failing nothing.  Do you like Brian, the talking dog on Family Guy who has an alcohol addiction?  Well, meet Buddy, who is totally not a rip-off of Brian, because he is a police dog who snorts crack from the evidence locker.

Oh, that Bullet, always getting into shenanigans!

And if you’re a woke SJW feminist, Paradise PD flips the tables on the #MeToo movement by having a powerful female cop sexually harass a fatter male subordinate, finally showing those evil men what it’s like to be harassed.  Yeah, go Netflix, being #wokeaf.

Oh, and let’s not forget that episode where they try to solve Black Lives Matter vs. Blue Lives Matter protests.

The show fails the worse at playing the storyline it is trying to satire—the son of a hero cop who wants nothing more to be just like his dad.  Even as a satire of that motif, the show fails miserably, with only forced laughs of sympathy than a genuine reaction.

Each character really just stays the same throughout the series, playing their most cliched of cliched version of themselves.  Kevin, the main character, is so bland that the show can run better without his presence.

If you are a fan of Family Guy, you may have been told to check out Paradise PD.  I would advise against it.  It would be a crime against humor.