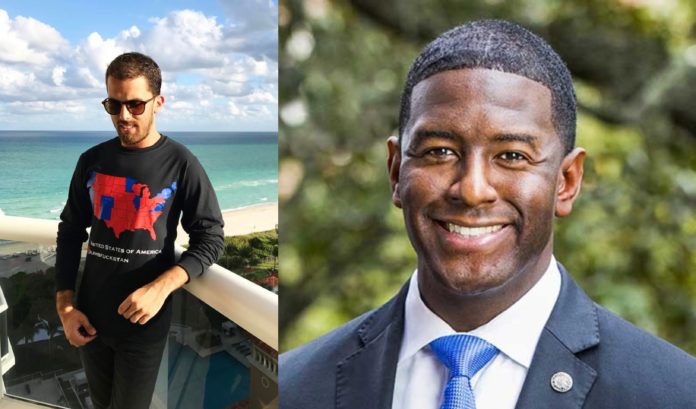 I do not like Ron DeSantis. I think he is weak on immigration and has adopted a reefer madness era stance on marijuana. He is not nearly as charismatic or engaging as his Democratic opponent Andrew Gillum.

As I am sure you have seen over the past few days, mainstream media controllers and progressive groups have slammed Ron DeSantis for ties to allegedly racist groups or individuals. At this point, the only thing we haven’t seen from the unhinged left in their attacks on the Republican candidate is a DNA test revealing him as the long lost lovechild of David Duke.

Gillum’s campaign has been given the proverbial moral “high ground” in the campaign because of these revelations about some individuals surrounding DeSantis. However, when you start playing the guilt-by-association game in politics, it almost always comes back to bite you in the ass.

The Central Florida Post has discovered that Andrew Gillum’s new Youth Director/Deputy Constituency Director once posed in a shirt describing all states who voted for President Donald Trump as “Dumbfuckistan”. Blue states were described as “United States of America,” because only those who voted for Hillary Clinton should be considered Americans.

The image was shared on his Instagram profile “manny597“, accompanied by the following status.

“112 days into this fiasco I think it’s time for this picture to be posted. #sorrynotsorry #thisisnotnormal”

Manny Orozco Ballestas was jubilant and welcoming in a video featured on Gillum’s social media on Tuesday, seeming like a swell guy who really wants to help elect someone who he thinks will best govern the state of Florida.

But how can he really do so? If he views anyone who isn’t a Democrat as a “dumbfuck” and not part of America… how can his boss preach tolerance? People of all walks of life and races are registered as Republicans. Does Manny Orozco Ballestas just hate the White Republicans or does he hate anyone who is a registered Republican?

Furthermore, why does Andrew Gillum allow someone who views millions of Floridians as “dumbfucks” hold a leadership position in is campaign? Has George Soros promised him so much money that he has decided to not even try to appeal to voters who do not adopt his radical Alt-Left policies?

If Ron DeSantis must be held accountable for everything anyone associated with his campaign has ever said or done… shouldn’t the same apply to Andrew Gillum? Additionally, what does this say about the Gillum campaign’s vetting process? It’s one thing for someone who supports your campaign to say something off-color and for an actual paid staffer to do so.

Manny Orozco Ballesta’s belief that anyone who didn’t vote for Hillary Clinton is a “dumbfuck” is close-minded. I would argue that is rabidly anti-American. Andrew Gillum should embrace Ballestas viewpoints of ALL REPUBLICANS being “dumbfucks” or fire Ballestas and find another messenger.

Go for it Andrew… be SUPER WOKE and SLAY QUEEN! Show us that you don’t accept intolerance or hate from anyone, especially the people you pay to run your campaign.

If not, you should shut up and stop acting like you want to govern the WHOLE state of Florida. I’ll be at your next event in Central Florida to settle this if you don’t take care of it beforehand.