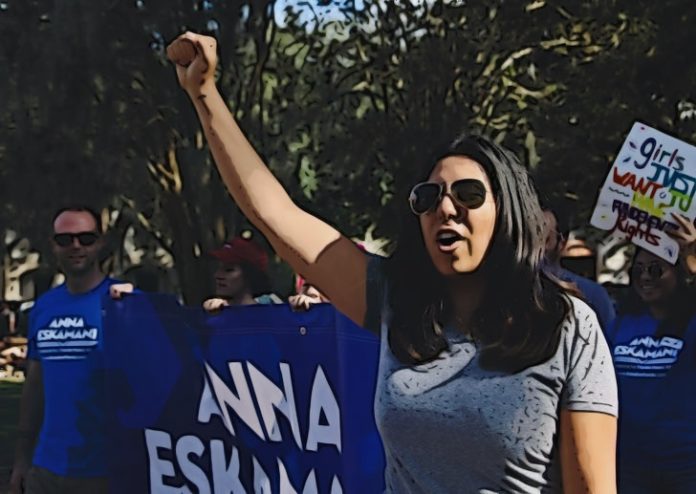 The butthurt Republicans, led by apparent bitch baby Blaise Ingoglia, decided to attack Eskamani, the Democrat who is kicking Winter Park Republican Stockton Reeve’s ass in fundraising and poll numbers for her use of vulgar words such as “pussy” or “fuck”. According to the dumbfucks at the Republican Party of Florida, language like this is fucking up our children, making them more into horrible little fucking cunts and ruining this nation with their fucking hatred and active use of their fucking constitutional rights.

The attacks seem to come as Republicans are now shitting their pants at the badass campaign skills of Eskamani, who is set to take the seat currently being held by Orlando Republican State Representative Mike Miller.

Eskamani is a progressive feminist who previously worked for Planned Parenthood and Equality Florida, where she marched to fight for the rights of gays and lesbians to engage in sucking, licking, and swallowing each other in a legal marital setting.

Republicans have historically been against the idea of a man sticking their penis deep into another man’s throat, but recently with Obergefell v. Hodges and the work of fucking activists like Eskamani, conservative faggots like Milo Yiannapoulis can get his perfect bleached asshole pounded by his legal husband’s big black cock over and over until his anus is filled with his husband’s marital seed, all thanks to leaders like Anna.

Republicans should be fucking pissed at what socialist shit Anna can bring to Florida should she be elected. They should be screaming out to the rooftops HOLY FUCKING SHIT GUYS DON’T VOTE ANNA ESKAMANI… DON’T BE A FUCKING DUMBASS.

Republicans are usually the party of balls. Republicans elected Donald J. Trump because he was a fucking asshole with the gigantic golden balls to fuck up the DC Establishment. But instead of having some fucking balls, Republican pussies are complaining because the mean Iranian lady hurt their fucking feelings. Perhaps they should take Preparation H and find their fucking safe space in their mom’s basement, seeing as they are just let Anna neuter their balls.