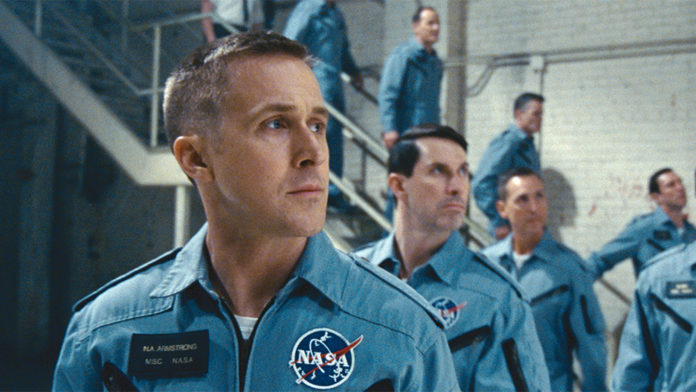 At its core, First Man is less about the mission to the Moon but the families left behind, whether it be the families of astronaut martyrs, or the risk Armstrong himself is taking.

Whenever we tend to discuss the legend of Neil Armstrong, we tell it with mythical simplicity.  Armstrong has been embraced as an American hero, an icon deified into our psyche.

First Man dismantles that mythical façade, showing Armstrong and the infamous lunar launch in a human, emotional way, presenting the painful backstory behind one of the greatest aerospace accomplishments in human history.

The film depicts Armstrong as a simple family man, an aerodynamics engineer who, still mourning the loss of his young daughter to cancer, is recruited for the historic space mission.  But this mission movie is not like others before it. This is no Apollo 13 or Hidden Figures.  In fact, very little of the movie was based around the mission and training.

At its core, First Man is less about the mission to the Moon but the families left behind, whether it be the families of astronaut martyrs, or the risk Armstrong himself is taking. You may very well sob when Armstrong prepares his children of that potentiality. It attacks your emotions somehow by dodging them.

The movie is real and heartfelt, purposefully tearing at your heart strings as you connect with the astronauts who befriend Armstrong, watching as their families intertwine, and then watch tragedy continue to unfold.  It is a sombering reminder of the very real sacrifices so many had made.

Unlike other historical dramas, which tends to depict widespread support for heroism, this film delves into the controversies, chaos, and politics behind the scenes.  Many forget this mission was being prepped during the 1960s Counterculture. Progressive activists protested the mission due to costs, and conservative politicians agreed.  And as more became martyrs it became harder and harder to justify the financial and human costs.

Most importantly, First Man is filled with patriotic Americana.  The controversy around the American flag was for naught (the Moon flag flies at the end), but more importantly, the film depicts the traditional nuclear family dynamic that once symbolized American culture.  In many ways, First Man is an homage to traditional values that will be more enjoyable for conservatives than progressives.  Even more so, Gosling’s portrayal of Armstrong as a Stoic family man unconcerned of the publicity is in direct contrast to contemporary obnoxiousness in society and politics.

This is truly a heartfelt American movie that is sure to be a contender come award season.