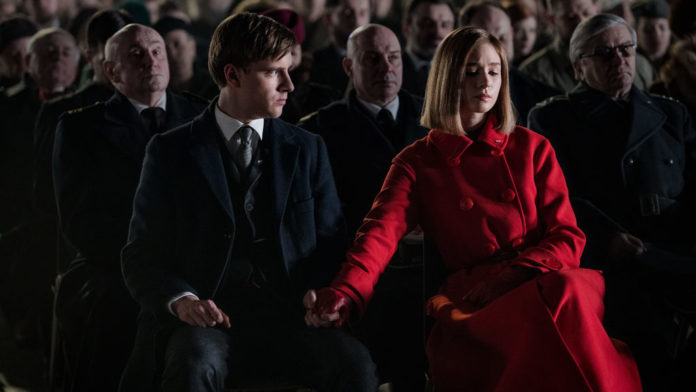 Though the series is slow and confusing, it sets itself to an interesting world.

Take the dark grittiness of Gotham, mix in a brainwashed law student, and add an alternate history where somehow the Soviet Union is Poland’s bitch, and you have 1983.

1983 is an alternate history thriller that had the potential to rival Man In The High Castle, and though the concept is interesting, the story runs slow and monotonous.

The series depicts an alternate 2003, where the Cold War still occurs after false-flag terrorism unified a divided Poland under its communist regime. This single point of divergence, according to the series, not only keeps communism as an ongoing global threat, but turns Poland into a Yugoslav-style communist state, not only freeing itself from Soviet oppression but counseling the Soviets on their own military blunders.

But the series is less of an alternate history and more of a neo-noir crime thriller, following a model mimicking The Extant or Altered Carbon. The series introduces you to a unique and unfamiliar world, with little social context to prepare you. You may not have to deal with aliens or immortals, but those not well-versed in history, particularly Polish history, will be lost throughout the series.

The series follows three cliched characters intertwined in a conspiracy of the highest order. Anatol is a police investigator trying to solve the staged suicide of a revolutionary, while loyal communist Kajetan slowly comes to realize the atrocities the Communist Party commits in the name of Machiavellian stability.

Though the series is slow and confusing, it sets itself to an interesting world. The series takes place in 2003, during the actual Iraq War (which occurs under a Gore Presidency in this story), and geopolitics plays a minor but unique role, with both Israel and Iran having sub-plots set up.

1983 has potential moving forward, and with eight episodes, it’s easy to see how this series can simply an introduction to a larger, more communist world. It may be best to look up “History of Poland” on Wikipedia before binge watching though.