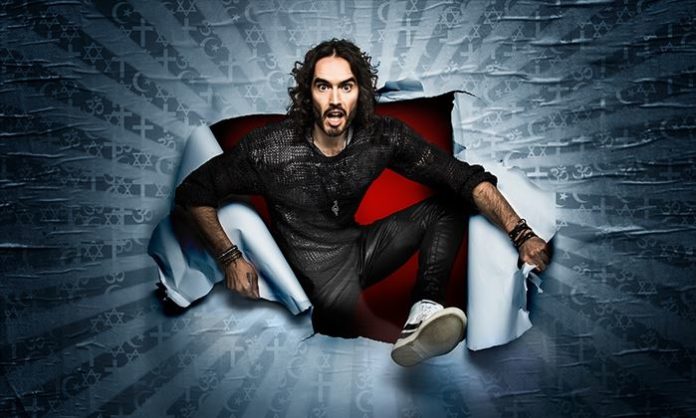 In what is less comedy and more a one-man show, Brand struggles between his own vanity and his desire to help others, his own wealth and his populist ideals.

He got clean from drugs, become more spiritual, and has taken on the banks and the media. But if you think Hare Krishna and Karl Marx made Russell Brand any less flamboyant and excitable, you would be mistaken. The satirical populist brings that same energy and bravado you expect in Re:Birth, his new Netflix special.

Re:Birth follows the same pattern you get from a Russell Brand special, with self-deprecating humor focusing on his foolishness and growth as an anti-capitalist activist, all underlaid with the recent birth of his daughter. Brand weaves hypersexual romps with poetic critiques of well-established institutions and the elites that run the show.

The theme of the special revolves around the birth of Brand’s daughter, in which within a disturbing and quasi-misogynist description of childbirth turns into a spiritual revelation about consciousness and life.

But the program, much like Brand’s personal spiritual growth, goes much deeper, with Brand criticizing his own foolishness as an activist. It is an ingenious move, with Brand’s introspection connecting him to his conservative critics on a human level.

Brand’s self-critique bases around his adequacy as an activist, himself being a wealthy comedian and actor. He directly addresses Fox News’s concerns both with witty comebacks and somber agreements. In essence, Brand de-constructs himself and his own arguments.

Brand’s self-criticism is based on his criticism of elitism. In what is less comedy and more a one-man show, Brand struggles between his own vanity and his desire to help others, his own wealth and his populist ideals. He criticizes capitalism and consumerism, while recognizing his own dependence of it, before ending with a beautiful, prophetic message.

Despite talking about the many changes in his own life, Brand has not changed his style. While other comedians, like the aforementioned Jefferies, softened their tones with the birth of children, Brand continues with the thrusts and toilet humor that has made him both a household name and a political jester.