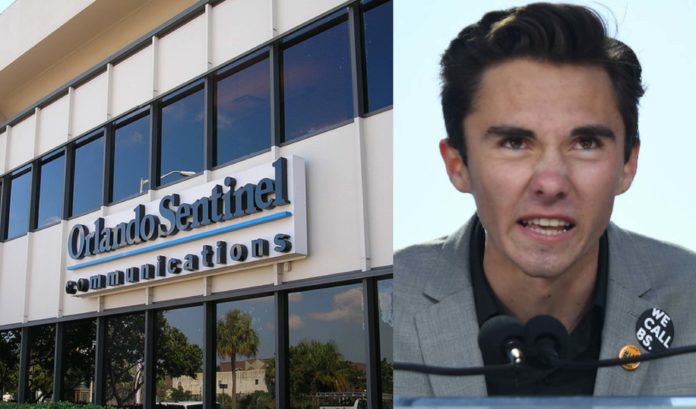 If Facebook is truly worried about ultimate transparency on their platform, why is it that they have failed to require the Orlando Sentinel to properly register under the new rules and granted them a waiver while forcing other news publisher to abide by the new rules.

The Orlando Sentinel, Florida’s most recognizable newspaper, is running ads with political content without the proper disclaimer or credentialing set forth by Facebook to prevent foreign interference in our election process. The newspaper, which has seen years or layoffs and buyouts, is struggling to adapt to the modern media landscape as people seek to digest their news through online and video content as opposed to print formats.

It is currently the flagship publication of Tribune Publishing, which also publishes the Sun-Sentinel, the Baltimore Sun, Hartford Courant and New York Daily News. Tribune Publishing is a publicly traded company underwritten by international stockholders, begging to question if their advertising efforts and ads creation is being in part potentially being funded by foreign assets.

In the past three presidential elections, the Sentinel has endorsed all three Democrat contenders and featured editorials or content worshiping establishment Republicans with deep ties to the globalist wing of the party. They also endorsed socialist Democrat gubernatorial candidate Andrew Gillum, a radical far left politician in Florida’s 2018 elections.

While independent or conservative leaning news outlets have undergone the arduous process to meet Facebook’s stringent new rules regarding political content ads, the Orlando Sentinel has either not been required to do so by Facebook or has willfully ignored new guidelines implemented by the company in the early summer of 2018. A review of Facebook’s policies states the following in regards to advertising content with political or social undertones. News publishers fought these restrictions last year, but Facebook has only granted “waivers” to certain outlets, again demonstrating their inherent bias and interest in molding the minds of their users for political purposes.

Following the implementation of these new rules, many independent or alternative media outfits have gone through the credentialing process with Facebook, which requires advertisers to verify the identity of the person placing the ads, a disclaimer on all ads, and their inclusion in a publicly searchable database that shows how much money advertisers are allocating for their ads. Pro-Trump media outlets have reported that they have experienced a never-ending approval process and extremely long waits times once they are approved and place political content ads. Some have reported that they are even denied when trying to run ads that fit Facebook’s guidelines and standards.

A handful of major left-leaning outlets have reported similar problems, but the Orlando Sentinel has seemed to escape all oversight and efforts by Facebook to provide a more transparent platform. The political content ads archive shows no currently active ads from the Orlando Sentinel, yet The Gateway Pundit has obtained a screenshot of an ad with political and social undertones currently being sponsored by the mainstream media publication.

It’s for an article by writer David Whitely, who explains why gun-control advocate and noted moron David Hogg didn’t need the exemplary grades or test scores everyone else needs to obtain entry into the prestigious Ivy League school Harvard, which has offered him entry as an offering to the social justice warrior mob who worship at Hogg’s altar of uniformed teenage angst.

As you can see, the ad does not display a proper disclaimer. It also does not appear in the political content ads archive, as evidenced by a simple search. So, if Facebook is truly worried about ultimate transparency on their platform, why is it that they have failed to require the Orlando Sentinel to properly register under the new rules and granted them a waiver while forcing other news publisher to abide by the new rules. Alternatively, why is the Orlando Sentinel knowingly operating on the platform in clear violation of their guidelines and policies in the spirit of getting off on a “technicality”? What concessions did they make to Facebook in order to escape rules that the vast majority of news publications have to abide by?

Unfortunately the rules seem to apply to some, mostly conservative or Pro-Trump, but not mainstream media outlets like the Orlando Sentinel. If they are truly the paragons of virtue that they bill themselves as, they should immediately release their ad spends since May of 2018 and begin the approval process with Facebook before sponsoring political content any further on the platform.