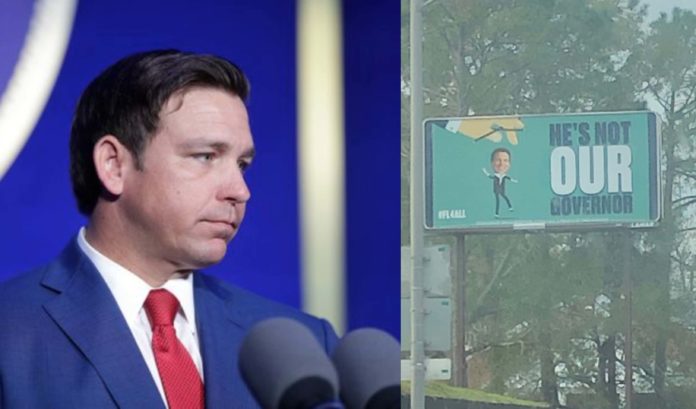 As we predicted several weeks ago, leftists in Florida intend to follow the playbook of the national #Resistance movement in opposing Governor Ron DeSantis, who was sworn in earlier this week.

In a tweet by Politico Florida’s healthcare reporter Alexander Glorioso, she scoped a billboard right outside the heart of the Florida capitol city of Tallahassee Saturday morning. The graphic displays DeSantis as a marionette puppet attached to an orangish/yellow hand. It’s unclear if that is a reference to President Trump… er… “Orange Man Bad.”

Spotted on Bronough and Tennessee in Tallahassee: “He’s not our governor #FL4ALL” #sayfie #FlaPol pic.twitter.com/ivDOiG6fvi

The hashtag on the billboard features #FL4ALL, which has been used by the radical pro-illegal group Dream Defenders. They promote open borders and claim that police are racist with “no place in society.” The group fervently supported Andrew Gillum in the 2018 gubernatorial election in Florida.

Read more about how the leftists forces in Florida intend on stymieing DeSantis’ efforts and disrupt Florida’s political system.