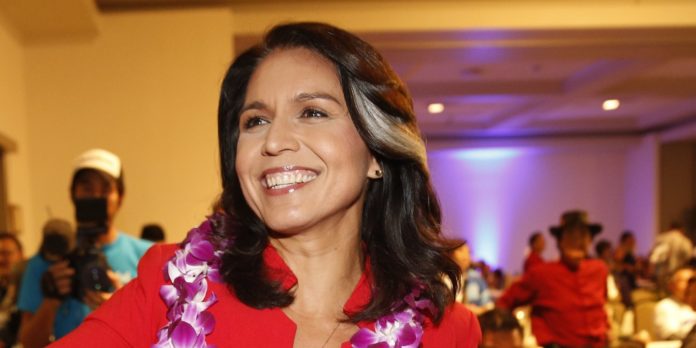 While in the Hawaii State Legislature, Representative Gabbard signed up for the Army National Guard to serve her nation in Iraq, choosing to retire from the Legislature.

But another candidate, who is not well-known, has entered into the race who is the real progressive to watch.You may not have heard of Congresswoman Tulsi Gabbard (D-HI), but she is a behind-the-scenes trailblazer in her own right and young progressives should take notice.

Congresswoman Gabbard was elected by the People of Hawaii to represent the Second District back in 2012. From the beginning of her political career, she put principle over power, resigning as Vice Chairwoman of the Democratic National Committee to support the Sanders campaign, who the DNC covertly abused.

Congresswoman Gabbard, like Senator Sanders, has a history of putting the people over her party, as well as supporting progressive ideals. She attacked President Obama’s proposed Trans-Pacific Partnership, a view she shares with the man whose job she seeks, as well as speaking out against President Obama’s imperialist military interventions.

Like Senators Sanders and Warren, Congresswoman Gabbard has fought against Wall Street, political corruption, and money in politics, while also fighting for pro-peace and pro-cannabis policies in DC. But Congresswoman Gabbard has several unique qualities not shared by Senators Sanders and Warren, the most obvious being her age.

Both Senators Sanders and Warren would be in their 70’s if they were successful in their bids for the Oval Office. With the youth vote critical to both parties in 2020, and Millennials making a key demographic of the Sanders movement, the young Congresswoman has a chance to take those votes from the elderly standard-bearers.

But Congresswoman Gabbard has another trait unique trait that differentiates her from virtually every potential Democratic candidate for that office; she served in the military.

While in the Hawaii State Legislature, Representative Gabbard signed up for the Army National Guard to serve her nation in Iraq, choosing to retire from the Legislature. This would make President Gabbard the first Democratic military veteran to serve as President in forty years.

This is the true sign of the Congresswoman’s character. Instead of choosing a political career, a career of ego, Tulsi Gabbard chose to selflessly serve her nation at a time of war. This type of selfless character is absent from politicians from both parties, and that alone makes Gabbard a highly qualified candidate.

Unlike President Trump, whose “bone spurs” prevented him from serving in a useless war, Tulsi Gabbard volunteered willingly, and fought alongside other brave men and women. She understands the issues of veterans because she is one, something the veterans have not had in the White House for almost a decade.

Add all of this to the fact that she is an identity politicker’s dream candidate, and you have a formidable candidate in Gabbard. A potpourri of demographics, Tulsi Gabbard is a Millennial, a woman, an Asian-American, an Indian-American, and the first Hindu Member of Congress in American history. She represents the diverse melting pot of America, the multiculturalism that the left famously promotes.

After the Nixon resignation, Democrats had a massive influx of candidates, leading to a dark horse to maneuver new primary rules and rise to the top. Tulsi Gabbard, in a similar environment, is set to be the Democrats’ dark horse, and possibly best chance at beating Donald Trump in 2020.