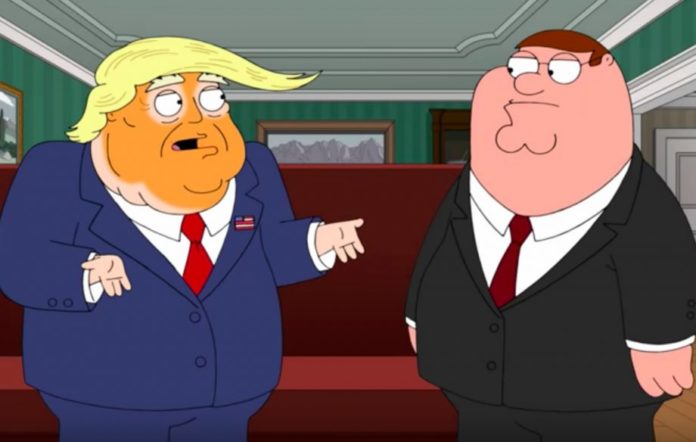 The jabs at the Trump Family may be too much for his cultists, but it is expected by the progressive writers at Family Guy.

Despite MacFarlane’s progressive views, his hit show Family Guy has done very little to poke fun of the left’s persona non grata President Trump. That was until last night, when MacFarlane lampooned the Trump Administration as only Family Guy could do.

The story starts as a typical episode, with Griffin going gray suddenly after a night in the basement. But Peter Griffin’s white hair somehow make him a credible senior analyst, and suddenly Peter becomes a satire of today’s news media.

Starting from Quahog, Griffin begins purposefully lying, presenting “fake news” after being told to by his anchor, despite having moral questions. This seems to go after Fox News, but as it progresses, it could easily apply to the news media as a whole, as Griffin participates in the hourly “Yelling of the Talking Points” rituals.

MacFarlane uses Griffin in this role as news pundit and later as White House Press Secretary to poke fun at a news industry which replaced reporting with opinions and investigations with reactions. This can be seen in recent news stories where politicians were asked to react to hateful comments made by Congressmembers Rashida Tlaib (D-MI) and Steve King (R-IA).

The jabs at the Trump Family may be too much for his cultists, but it is expected by the progressive writers at Family Guy, but rest assured it comes with it’s appropriate meta-cutaways, poking fun at their own left-wing bias, as well as insults on a variety of topics, institutions and even former Presidents.

In the end, MacFarlane was trying to tell us that President Trump and Peter Griffin are the same people—two fat fools who think they are smart yet lack basic common sense, with wives way hotter than they deserve, and an equally nonsensical family. Combine that with Griffin’s all-too-real jabs at Ivanka, Russian spies, and Roger Stone, Family Guy is using humor to mask the mood of every progressive—fear. And lest we forget, fear is a powerful motivator for elections.