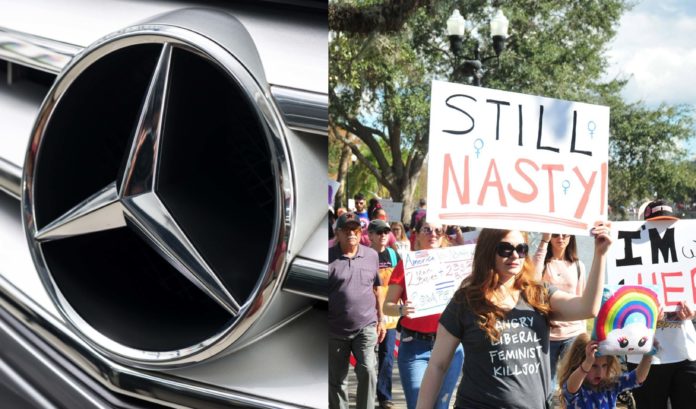 With even the DNC “walking away” from the Women’s March, it’s sad to see Mercedes Benz standing by a movement that has become infested with Jew hatred and radical anarchist elements of the progressive wing of the Democrat party.

As the Women’s March has been steadily exposed for their associations with virulent anti-Semites, including several within their leadership, even the Democratic National Committee has now disavowed the movement that has drawn praise from uber-racist Louis Farrakhan, who has called Jews termites and referred to Hitler as a “great man.”

Tameka Mallory and Linda Sarsour, who serve in top-level roles within the movement, have yet to apologize or back away from their associations with Farrakhan or close proximity to anti-Semitic groups like the Council on American-Islamic relations or the Islamic Society of North America. Both groups have documented connections to terrorist groups like Hezbollah and have hosted co-conspirators of the first World Trade Center bombing at fundraising events.

In the mid 2000’s, CAIR even invited Sheikh Abdur-Rahman Al-Sudais to speak at a gathering in Orlando, Florida. Al-Sudais appeared on Saudi television and said that Jews needed to be “annihilated.” He continued by referring to Jews as “the scum of the human race, the rats of the world, the killers of prophets, and the grandsons of monkeys and pigs.”

A spokeswoman from Mercedes-Benz headquarters stated that they are not in control of what local dealerships do, but declined to denounce or distance themselves as a brand from the gathering of anti-Semites and alt-left groups like Antifa that regularly participate in the Women’s March.

Dominic Ford, the General Manager of the dealership, claimed in an email that he had no idea what we were talking about and that he had not approved any sponsorship of the Women’s March.

However, promotional material posted on the Facebook page for the Women’s March – Central Florida Chapter names Mercedes-Benz as the only non-political sponsor of the march. Planned Parenthood and other social justice groups are also sponsoring.

With even the DNC “walking away” from the Women’s March, it’s sad to see Mercedes Benz standing by a movement that has become infested with Jew hatred and radical anarchist elements of the progressive wing of the Democrat party.

We will be covering the Women’s March this Saturday, including the Orlando march which will feature Linda Sarsour ally and known anti-Semite Rasha Mubarak, who famously posed with Rashida Talib, Illhan Omar and Sarsour during the congressional swearing in ceremonies earlier this month.