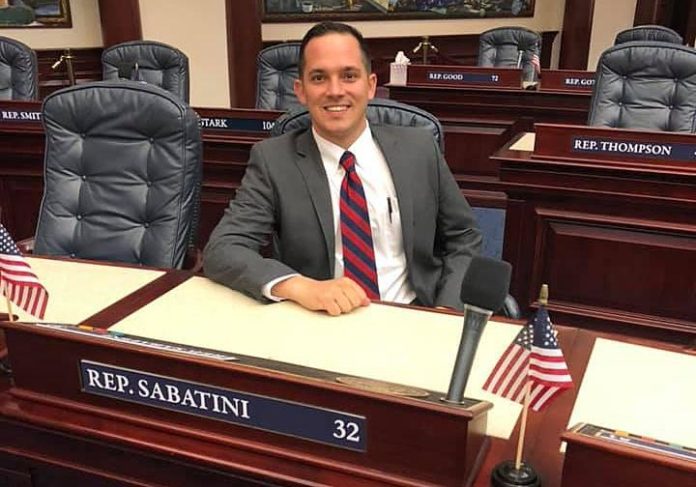 Amid all of the blackface and brownface allegations sweeping the nation, we have obtained exclusive photos of Florida State Representative Anthony Sabatini dressed in offensive “greenface” and “whiteface” costumes.

An environmentalist, who went to high school with Florida State Representative Anthony Sabatini, has provided the Central Florida Post with shocking photos of the 16-year old high school student in a costume that appears to mock turtles.

The individual, who asked to remain anonymous, said that Sabatini was part of a group of students known as the “costume crazies”, who were famous for their outlandish costumes during school spirit weeks or other special occasions, confirming an earlier report from the Orlando Weekly.

In the photo, Sabatini has darkened his face to appear more like a turtle, matched with a top that resembles the underbelly of a turtle.

Nazik McMorren, a former classmate of Sabatini’s, tells the Central Florida Post that the high-school prankster turned elected official regularly made fun of turtles, sometimes even using derogatory terms like “shellback” and “slowwalker” to describe the animals. McMorren, who had certain turtle-like features, remembers Sabatini making jokes about “making some turtle stew”.

“One year he even got a turtle stew kit for Christmas that be bragged about around me and other kids he thought were environmentalist hippies,” explained McMorren.

Thousands of turtles die each year on Florida roadways, or even worse, become tasty snacks for residents and tourists alike. Sabatini’s “greenface” costume has alarmed several environmentalist groups in the Sunshine State. Some are even planning to organize statewide protests in support of the Florida softshell turtle, following the discovery of a yearbook passage from Sabatini’s elementary school, referencing a time he neglected to remove a Florida softshell from the carpool lane when he was a safety patrol overseeing morning drop-offs.

But his “greenface” costume isn’t the only fashion faux-pas that has Sabatini staring down calls for his resignation.

During the same time period, the teen was feeling so patriotic that he dressed up as good ole Uncle Sam, donning an offensive “whiteface” appearance. To make matters worse, he wore a wig that appeared to mock the elderly. He was even heard muttering the words “old people suck” in between third and fourth period.

Janis Butch, who was involved in left-wing student activities at Sabatini’s high school, was incensed when we spoke to her over the phone about the over-the-top chauvinism.

“He was obsessed with America. You know, freedom and all that shit. He’s obviously a total Nazi now, considering he served in the National Guard and got elected as a Republican. It really was unbearable to have him walk around campus that whole day talking about American exceptionalism. We literally have Hitler 2.0 as President right now and he definitely voted for Trump, he’s dead to me.”

Butch said Sabatini called her a “commie-pinko” when she told him that his costume and his love for America offended her.

Sabatini did not respond to multiple requests for comment.

The Florida Democratic Party and several progressive groups have joined the American Communist Party and Turtle Lovers of Florida in calling for his immediate resignation.