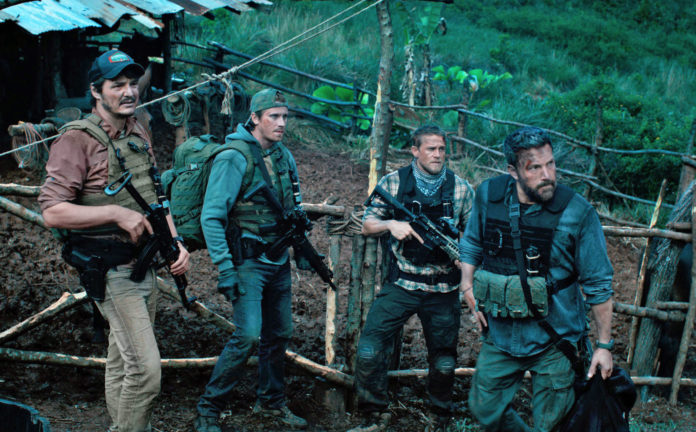 These were great actors playing great roles that unfortunately were written poorly. Triple Frontier, like most Netflix films, is a quick, fun nothing-burger to watch in while you wait your next binge season.

At the beginning of this movie, Charlie Hunnam recounts a tale of him choking a civilian
at a Publix. His speech is meant to set the theme this film wants to present, about the
horrors of violence and the price of being a warrior.

That is the common theme of Triple Frontier, an action-packed tale of heroic soldiers
justifying greed with patriotism, blurring the lines between good in a sad but dramatic
representation of our own values.

The story is simplistic. Oscar Isaacs plays a mercenary working with Colombian police
to take out the reclusive drug lord Lorea. After spending three years taking out small
fish, he is finally able to anti-climatically kill Lorea and take for his team $250 million.
His team? Four manly retired Spec Ops ready to take out a kingpin and take a bounty
without question. Though great actors like Hunnam and Tron’s Garrett Hedlund round
these knockoff Expendables, it is the Batfleck himself who makes this movie.

Ben Affleck puts his brooding father face to use, playing the role of a retired captain who
even his daughter wishes was Christian Bale. Affleck goes from zero to hero quite
quickly, but that rise leads to brutality and destruction. As Hunnam said, “the price of
being a warrior.”

Isaacs walks a fine line between his desire to kill Lorea, and his lust for the large
cashflow. You can’t really tell his motivation throughout the story, as it seems to shift
according to need. Mitt Romney has flip-flopped less than Isaacs.

It’s disappointing to watch American soldiers greedily stealing hundreds of millions of
dollars, so much so that some are willing to miss a “hard out”, nearly failing their
mission. These were great actors playing great roles that unfortunately were written poorly. Triple Frontier, like most Netflix films, is a quick, fun nothing-burger to watch in while you wait your next binge season.

But if you want to watch a good bro-mantic action film without the steroids, this is your
movie.