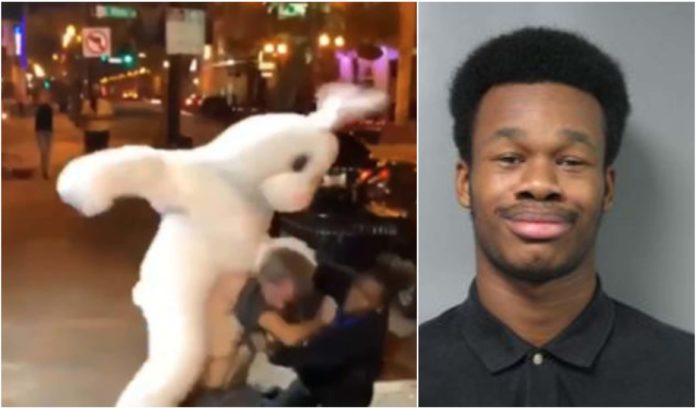 The Central Florida Post has discovered news articles from Delaware and New Jersey describing how the man wearing an Easter Bunny costume while breaking up a fight has been charged with armed robbery and has been sought in a rash of car burglaries.

We have all seen the mega-viral video of a man dressed in an Easter bunny costume breaking up a fight in Downtown Orlando on Easter dozens of times since it made the rounds late last night. In the video, the Easter Bunny vigilante bravely steps in to help a women being attacked by what looks like a vagrant or street person outside Underground Public House off Orange Ave in Downtown Orlando.

The man behind the suit, Antoine McDonald, has spent most of Monday doing a victory lap and landing interviews with major media outlets and local news outfits from coast to coast, as well as earning a considerable amount of ink around the globe for his bravery.

The now 20-year old McDonald who recently moved to the area according to the Orlando Weekly, was arrested on multiple counts in 2017 according to Delaware Online. A man strongly resembling McDonald, aged 18 at the time, was with two counts of first degree robbery, possession of a firearm during the commission of a felony, conspiracy and tampering with physical evidence.

He allegedly participated in an armed robbery at 3am, in which he and three other assailants assaulted several people while robbing them. McDonald’s car was also used in the commission of the crimes.

“The first robbery occurred about 3:15 a.m. Sunday in the 400 block of Country Drive in Country Village Apartments, when four people approached a group of three sitting on the steps outside the apartment building, said Master Cpl. Mark Hoffman, a spokesman with Dover Police Department.

One man, who was armed with a gun, stole money from two of the people and took an ID, Hoffman said. The men also assaulted those sitting outside, hitting one with their hand and another with the handgun, he said.”

A year later in South Brunswick, NJ… police issued a warrant for McDonald in relation to a rash of car burglaries of unlocked cars. This warrant was issued in late September of 2018 and it is not known whether or not McDonald was every officially apprehended to answer for his alleged involvement in the burglaries.

Earlier this morning, the Tampa Bay Times reported that McDonald had a series of other arrests in New Jersey, and had even been arrested multiple times in Florida since presumably fleeing warrants for his arrest in New Jersey.

He could have remained anonymous thanks to his Easter Bunny costume following Sunday’s viral video, but his need to whore for attention apparently outweighed common sense.