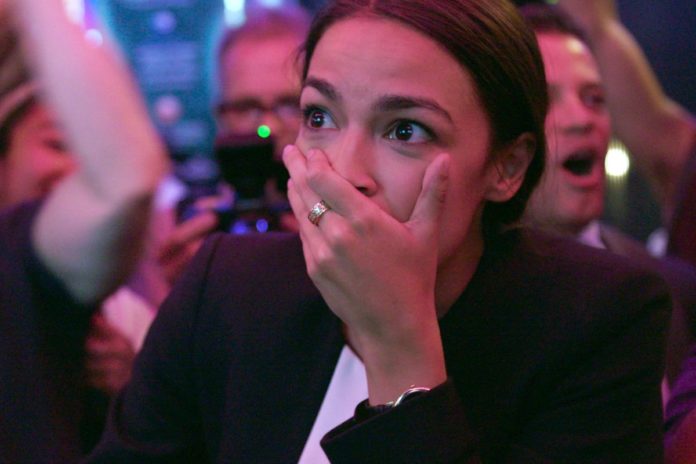 So… what happened to AOC? Were voters hoodwinked? Did she have some crazy Machiavellian plan to hide her true rabid leftist leanings? I don’t think so, the girl ain’t that smart.

Rachel Lear’s documentary on the 2018 mid-term elections featuring female candidates for congress on the Democrat line was released today on Netflix. The clear star of the film is the increasingly wacky Alexandria Ocasio-Cortez, who rolls out a new form of moonbattery on an almost daily basis, usually in odd Instagram videos or bizarro world tweets.

However, after watching Knock Down The House, it appears that AOC wasn’t always so AOC’ish. She talks about tearing down the established order of things, about her campaign not being about Republican vs. Democrat but against the powers-that-be… and showcases the importance of why we need people connected to the community representing us instead of washed-up political hacks.

In all honesty, at least in how the filmmakers portrayed her, the looneybin ramblings we have come to expect from her were pretty much nonexistent. Now we had the occasional mention of abolishing ICE and climate change, but it was not by any means the centerpiece of her ethos. AOC was all about returning power to the people, actually honing the same energy that President Trump has used to overthrow the Republican establishment and rebuild the GOP in his image.

So… what happened to AOC? Were voters hoodwinked? Did she have some crazy Machiavellian plan to hide her true rabid leftist leanings? I don’t think so, the girl ain’t that smart.

It’s my theory that the mainstream media and violent alt-left groups like Antifa have radicalized her since she beat longtime incumbent Joe Crowley in the summer of 2018. The media gives her constant attention, while the alt-left and a few other more sinister players like Congresswoman Ilhan Omar push her further into the morass of the alt-left that fetishizes terrorists.

AOC might have truly started out with respectable intentions with a left-wing bend. Sadly though, it is increasingly clear that she has fallen into the age-old tale about losing yourself in elected office. Alex from the Bronx has focused less on utterly destroying Democrat leadership in order to rebuild it in her image in an effort to help better the lives of her constituents, abandoning it for the cheap tweet peddling your run-of-the-mill talking point from the Chieftains of the “Trump Is Literally Hitler” resistance movement.

While she is busy with us, Pelosi is attending events saying that a glass of water with a “D” on it could win in her district. Democrats are floating the idea of primarying her. Profiles are being written about how AOC fever is waning.

She is capable of more and has spent so much time fighting with President Trump and the MAGA movement that she has left her flank wide-open. AOC had a VERY SHORT two-years to destabilize and reorganize the Democrat party. Instead… she assumed that her victory against incumbent Joe Crowley was the end.

It was the first battle in her theoretical revolution against the establishment, the beginning of war.

As she gets closer and closer to 2020, AOC will be left wondering… was it worth it to turn her focus on Trump instead of eliminating the corrupt leadership of the Democrat party?