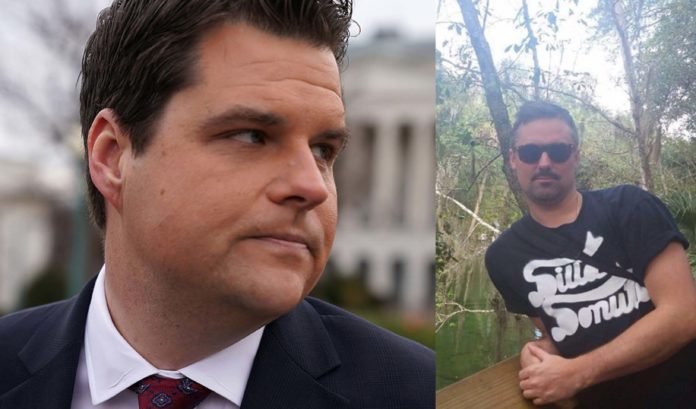 What I am about to tell you should not come as a surprise. Last night, a video circulated showing Congressman Matt Gaetz being “milkshaked” outside of a community townhall event in North Florida. We discussed it in this article and why it signals the American left’s commitment to using violence against their political enemies.

Right on cue, a Florida based activist masquerading as a journalist, penned a piece celebrating the attack on Gaetz and praising the deranged woman who chucked the drink at him. Colin Wolf is known for his parroting of dangerous alt-left talking points, having smeared Congressman Gaetz and myself on numerous occasions prior to his latest outburst.

He referred to the person who filmed the encounter as a hero and listed several instances where he disagreed with Gaetz politically, framing them as reasons he should have been attacked. Milkshake attacks in Europe during the recent elections where the Brexit party reigned supreme, were often followed by violent melees or subsequent attacks on politicians who were milkshaked.

Gaetz himself addressed the frightening article by Wolf, which was promoted by journalist at the Tampa Bay Times.

Yet another example of the MSM truly becoming an #EnemyOfThePeople.

Will the great “paper of record” or other reporters call this out? I’m not holding my breath. Or my tongue. https://t.co/PIijOLqPiB

It’s not rocket science. With the mainstream and alt-left activists media (Wolf) praising such attacks, unhinged anti-Trump activists who have a long history of acting violently, will see this as a green-light to go even further than assault-by-beverage. As thousands of these mentally ill and otherwise unstable people plan to gather outside of the Amway Center to protests Trump’s historic campaign rally on June 18th, local law enforcement would be wise to monitor Wolf’s forthcoming write-ups and social media posts encouraging violence.

The unkempt feminazi that attacked Gaetz has since been released from jail. Emboldened by articles like Wolf’s, she is unapologetic and has called Gaetz a “big f*cking baby.”

We all know that if Ilhan Omar, Nancy Pelosi or Alexandria Ocasio-Cortez were attacked in a similar way… Wolf and his allies would lose their gourds. It would be labeled a right-wing fueled sugary-lynching of progressives, followed by calls to ruin the perpetrators life by way of a digital lynch mob.

Colin Wolf would cry like a little girl if someone did it to him, but that’s enough time calling out someone who is clearly unstable and needs serious help. The intolerant (increasingly violent) alt-left will stop at nothing to remove Trump from office and fulfill their wet dreams of “resisting.”

If you plan on attending Trump’s rally in Downtown Orlando on June 18th, you can email us at info@centralfloridapost.com. Email us if you see any dangerous activities from anti-Trump protesters. Email us if you see journalists collaborating with the alt-left. Email us if they quote you improperly or print false statements.