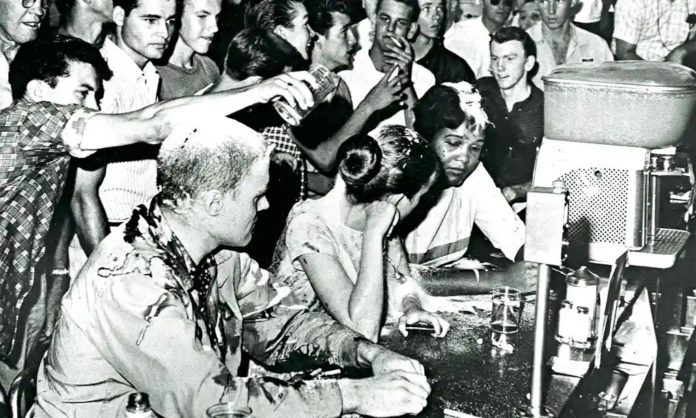 During the civil rights era in the 60’s, rabid racist Democrats would regularly pour or throw beverages on blacks who were engaging in peaceful sit-in protests at local drugstores and diners.

Earlier this month, Americans were reintroduced to the idea of chucking or dumping drinks on people you disagree with when Florida Congressman Matt Gaetz was violently attacked by an alt-left activist outside of one of his town hall events. Journalists and members of the progressive left-wing community in America have cheered the attack, telling Gaetz and other Trump supporters that they are lucky that it was only a milkshake.

This is obviously deranged behavior and clearly glorifies acts of political violence. Sadly it is nothing new from the modern American left, who have worked to dehumanize anyone to the right of Karl Marx in an effort to make fellow Americans view each other as sub-human enough that we deserve to be attacked.

The woman who attacked Gaetz with a drink was later charged with battery, but it didn’t prevent her leftist comrades from praising her act of political violence and the media glorifying those involved in dehumanizing Gaetz.

We have seen this before. During the civil rights era in the 60’s, rabid racist Democrats would regularly pour or throw beverages on blacks who were engaging in peaceful sit-in protests at local drugstores and diners. They would eventually escalate to brutal beatings, lynchings and other acts of savagery that marked a very dark point in American history.

You can read about it here…

It comes as no surprise that these same tactics are now being used by the alt-left and cheered on by the media in this country. They have become so disconnected with their own sanity and reality of the world around them that they no longer view anyone who supports Trump to be a human. They doxx us, deplatform us, debank us, shame us, violently attack us. This is what Trump supporters and conservatives are up against.

That is why we must continue to showcase their brutality and hold the line for our fellow Americans. Americans must not stand idly by while the leftist lynch mob bullies and intimidates Conservatives into silence.

Today, it is a milkshake. But, tomorrow, or next week, it could very well become a lynching or a beating.

As history continues to repeat itself, time will only tell how much longer Conservatives will tolerate being told to sit at the back of the bus by the Progressive Left, who despite their name, have always been the party of hate and division.