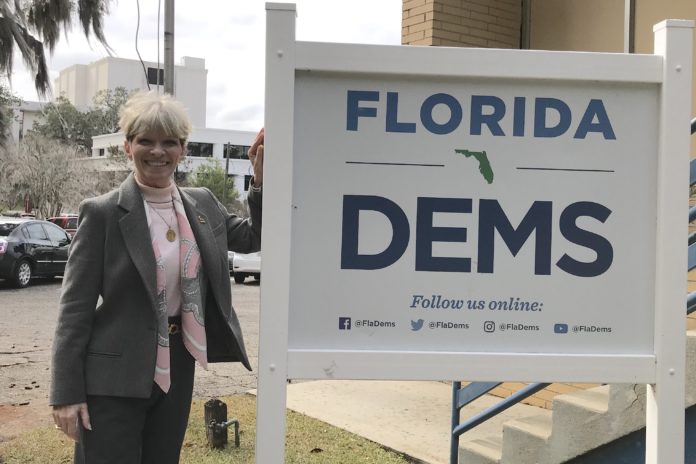 The fact that the Florida Democrat Party’s Chairwoman Terrie Rizzo refuses to denounce this behavior, and domestic terrorism, should tell you all you need to know about how she plans to run her party going in to the 2020 election cycle.

Coming up on a week after an Antifa domestic terrorist firebombed an ICE detention center in Tacoma, Washington, Florida Democrats have refused to condemn the domestic terrorist incident. Instead, several members of Florida’s Democrat Congressional delegation spent the day of the attack telling illegal immigrants how to evade capture from ICE agents.

Democrat support for the domestic terrorist organization known as Antifa is nothing new, with their allies in the mainstream media and progressive politics regularly celebrating the violent Alt-Left group that was most recently captured on camera brutally assaulting a gay journalist in Portland, Oregon. The journalist was admitted to the hospital with a brain bleed. Democrats and mainstream media journalists mocked his condition, celebrating the fact that a journalist that they viewed as “not a real journalist” was “taught a lesson” by the brave members of Antifa who were standing against Donald “Hitler” Trump and his fascist state.

Not surprisingly, the manifesto of the 69-year old Antifa terrorist who firebombed an ICE facility with a high-powered rifle, contains language used by congressional Democrats and the mainstream media describing holding centers as “concentration camps.” William Van Spronsen, who was also a member of the John Brown Gun Club (an anarcho-communist paramilitary group), was recently featured in a pro-Antifa news segment on CNN.

His manifesto, released prior to the attack to several Antifa groups (who did nothing to notify law enforcement of the impending domestic terrorist attack), sounds eerily similar to Alexandria Ocasio Cortez.

In these days of fascist hooligans preying on vulnerable people in our streets, in the name of the state or supported and defended by the state,

In these days of highly profitable detention/concentration camps and a battle over the semantics,

In these days of hopelessness, empty pursuit and empty yearning,

We are living in visible fascism ascendant.

Following his death at the hands of law enforcement, Antifa groups and news outlets across the United States have praised the firebomber.

The Seattle chapter posted on Facebook: “When our good friend and comrade Willem Van Spronsen took a stand against the fascist detention center in Tacoma, he became a martyr who gave his life to the struggle against fascism.”

“He was kind and deeply loved by many communities; we cannot let his death go unanswered,” it added. “May his death serve as a call to protest and direct action.”

The Antifa linked blog itsgoingdown, which regularly releases private information meant to harm anyone to the right of Karl Marx, also celebrated the firebomber.

“We understand why Willem Van Spronsen decided to give his life to interrupt the violence that is perpetrated against undocumented people in the United States every day.”

“Laws are just constructs. They have no value in and of themselves. They often serve to legitimize injustice that people would otherwise take action to oppose,” the author argued.

When reached for comment, Terrie Rizzo, the Chairwoman of the Florida Democrat Party, refused to condemn the firebomber or the domestic terrorist group known as Antifa. Key members of her leadership team and FDP spokesman Alex Morash also refused to answer the following three questions.

1). Does the Florida Democrat Party condemn the domestic terrorist organization known as Antifa?

2). Does the Florida Democrat Party condemn the 69-year old domestic terrorist who firebombed an ICE facility?

3). Does the Florida Democrat Party condemn language used by members of the media and congress that radicalized the 69-year old domestic terrorist who firebombed the ICE facility?

Representatives for Stephanie Murphy and Val Demings, Democrat members of Congress in the Central Florida area, also refused to condemn Antifa and the domestic terrorist attack carried out by a prominent member of the group. These same Florida Democrats, party officials and elected officials alike, did spend time slamming President Trump and pushing conspiracy theories on Twitter over the past week regarding Trump’s statements about several anti-American members of Congress.

They also spent July 13th, the day of the domestic terrorist attack, using charged language about ICE detention efforts, which included the messaging that it was an “all out war” on immigrants.

Xander Peters, a prominent alt-left writer with known sympathies for the domestic terrorist organization known as Antifa, was BCC’d on our email. He refused to denounce the attack and Antifa as a whole as well.

Alexandria Ocasio Cortez, Ilhan Omar, Ayanna Pressley and Rashida Tlaib have also refused to condemn the Antifa firebombing of an ICE facility. Worse yet, they will not go on record denouncing Al-Qaeda, the Islamic terrorist group behind the 9/11 attacks. Ilhan Omar and Tlaib have long associated with Islamist political outfits that have known terror ties.

This is the modern Democrat Party. This is the mainstream media. They have become so unhinged that they will support terrorist organizations and firebombers attacking government facilities, as long as those efforts are “Resisting Trump.”

The fact that the Florida Democrat Party’s Chairwoman Terrie Rizzo refuses to denounce this behavior, and domestic terrorism, should tell you all you need to know about how she plans to run her party going in to the 2020 election cycle.