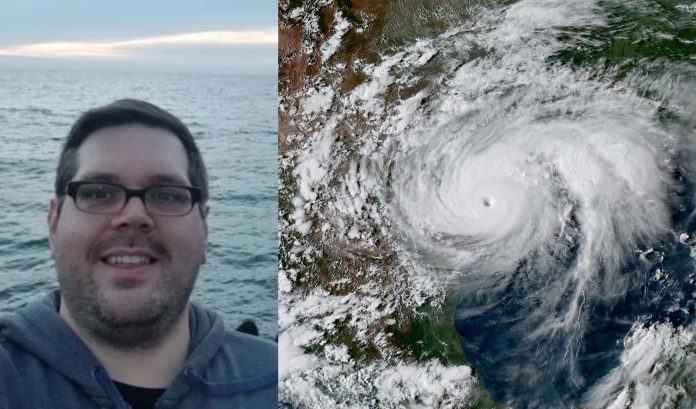 Following Hurricane Dorian’s deadly and devastating residency over the Bahamas, Orlando Weekly should ask themselves if it’s appropriate to employ the man who said Texans deserved Hurricane Harvey because they voted for Trump.

Remember the University of Tampa Professor who claimed that the damage and destruction caused by Hurricane Harvey in Texas was “karma” for the state voting in favor of electing Donald Trump over Hillary Clinton in 2016. Over a hundred people died and Storey still thought this was an okay thing to say.

As Democrats and progressives work day-and-night to manufacture outrage towards Donald Trump during Hurricane Dorian, they seem to have forgotten how much they defended and championed Storey’s infamous and now deleted 2017 tweet. Let’s reacquaint ourselves with the very real and disturbing “super woke” take from Storey following Hurricane Harvey in 2017.

“I don’t believe in instant karma but this kind of feels like it for Texas. Hopefully this will help them realize that the GOP doesn’t care about them.”

This kind of mindset is no different than the thought process of bigots like the Westboro Baptist Church, famous for their “GOD HATES FAGS” campaign that promotes the idea that because homosexuality is a sin in their wretched interpretation of the bible and Christianity, then gay people deserve to die of AIDS and America deserves terrorist attacks like 9/11 and the Pulse nightclub shooting because it embraces the “homosexual and LGBT agenda.” Storey believes that supporting Trump or the GOP is politically abhorrent and sinful, therefore Texans “deserved” Hurricane Harvey.

If the Bahamas were part of the United States or had a leader driven by an intense love for his country and nationalist ideals… would Storey argue that they deserved the death and damage of Hurricane Dorian?

Trump swiftly approved hundreds of millions in aid to Texas and has since provided even more aid. Storey’s implication that individual citizens deserved to be flooded out of their home and their lives put at risk because they disagreed with him politically is incredibly depraved statement to make. Storey has since apologized for his tweet and was swiftly fired by the University of Tampa for the abhorrent and hateful tweet.

However, he has still continued to write for the Central Florida based Orlando Weekly, an alt-left publication that regularly rants about Trump and spreads baseless conspiracy theories likening ICE detention centers to the horrors of Nazi concentration camps and crematorium in Hitler’s Germany.

While Storey has been limited to mostly theme park reviews and commentary… why is he even allowed to do that? I have nothing against the guy, his writing is actually very interesting and fun to read. But if he had been a conservative making that sort of comment under a Democrat administration, his life would have been ruined forever and he would have never been allowed to participate in the public sphere ever again.

His Twitter feed is still littered with #Resist talking points and even criticism of Trump for daring to tweet about multiple things, including Hurricane Dorian, on a given day. This is a classic of the alt-left and media, where they claim that if you are a conservative and aren’t talking about exactly what they want to discuss (gun control, crackdowns on free speech, anti-Semitic attacks on Israel), you must somehow be a horrible human being.

Conservatives or Trump supporters have their lives ruined on a daily basis for simply stating that there are two genders and that Democrats are largely adopting anti-Semitic views. They are labeled purveyors of “hate speech” and relentlessly harassed by the mainstream media. Many times journalists partner with domestic terrorist groups like Antifa to get private citizens fired from their jobs and to publish their home addresses online, while often times encouraging that those promoting “hate speech” be confronted. Many have lost their jobs, access to their bank accounts, and have been subsequently violently attacked by deranged leftists.

Storey’s treatment from the same people for his statements on Hurricane Harvey, which left over a hundred people dead in Texas? A plum writing gig, defense in the mainstream media and the ability to keep his Twitter account despite his tweet clearly violating their policy against directing hate towards a particular group of people.

That’s the difference between being a progressive versus a conservative in today’s society. You can pretty much do or say anything without consequence and with the backing of an entire political movement, media and thousands of activist groups.