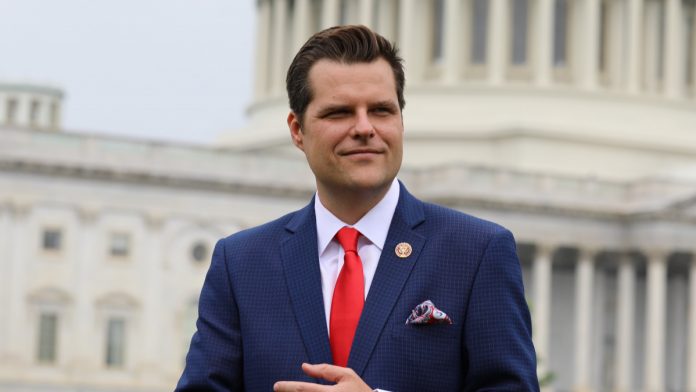 The North Florida Congressman, known for his no holds-barred sparring with delusional Democrats in Washington DC, will keynote the Orange County GOP’s annual fundraising dinner.

Matt Gaetz, arguably President Trump’s greatest and most prolific defender, will spend time rubbing elbows with a few hundred of Central Florida’s most dedicated Republican activists at the end of October. According to Orange County GOP Chairman Charles Hart, a VIP reception with the Congressman will be held prior to the dinner.

Ever since being elected in 2018, Gaetz has been a constant target of the violent alt-left. Several months ago, a former opponent of his, lobbed a projectile at him as he exited an event in his district. Mainstream media and journalists across the nation celebrated the violent attack on Mr. Gaetz, claiming he “deserved it.” A particularly deranged reporter named Colin Wolf, formerly of the Orlando Weekly, published a series of articles that appeared in the Orlando Weekly and Creative Loafing Tampa glorifying the incident.

Democrats have grown increasingly supportive of the domestic terrorist group known as Antifa, who regularly engage in political violence against innocent people who dare to love this country and support President Trump. Orange County GOP Chairman Charles Hart told us that Gaetz’s bravery in standing up to these radical elements of the new Democrat (Socialist) party make him the perfect headliner for their first annual “Trump Defender Gala.”

“We are honored to have Congressman Gaetz for our first Trump Defender Gala. The GOP needs more leaders like him in Washington DC who are fearless when it comes to defending President Trump and Western values.”

You can purchase tickets to the event by clicking here.