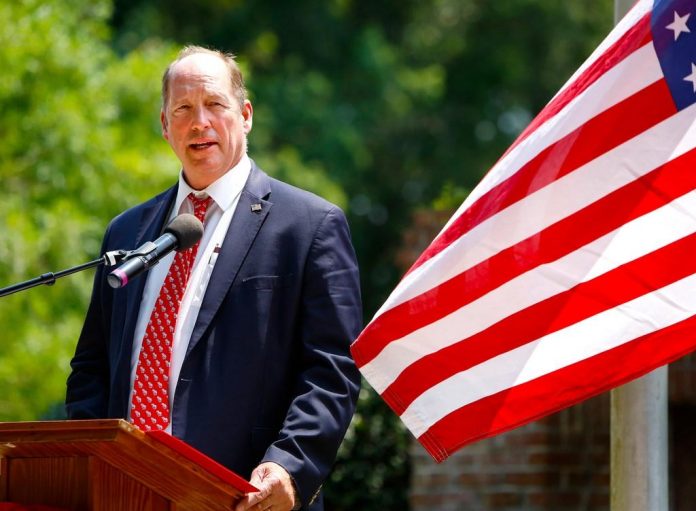 His term limit pledge was very direct – 8 years and done. He made a promise, and repeated that promise time and again over the years. He is known by many as a man of integrity who would never break his word.

Ted Yoho, who represents Florida’s 3rd Congressional District in the United States Congress ran for office in 2012 against Congressman Cliff Stearns.  A Veterinarian, Ted Yoho ran on term limits in a crowded primary with incumbent Cliff Stearns, Clay County Clerk of Court Jimmy Jett, and State Senator Steve Oelrich.  Dr. Yoho specialized in large animals and knew nearly every farmer in the newly-drawn rural district.  While the other “politicians” battled it out, Ted Yoho put on his charm – great smile to boot – opening his own checkbook and running a grassroots campaign.

Yoho, who had never run for office before, rose rapidly in the polls near the end of the race after the release of his campaign commercial featuring politicians depicted as pigs at a trough.  Yoho in his own voice narrated the commercial saying, “Career politicians, they’re like pigs feeding at the trough.  Career politicians got us in this mess.”

He went on to say, “the career politicians have given us $16 trillion in debt.  It’s time for new leadership.  I’ll repeal Obamacare and balance the budget – and after 8 years in Washington, I’ll come home.”

Congressman Yoho, who will be nearly 66 by the end of his current term, got elected by attacking career politicians and promising not to become one.  His term limit pledge was very direct – 8 years and done.  He made a promise, and repeated that promise time and again over the years.  Yoho spent a lifetime operating his business on his word and a handshake.  He is known by many as a man of integrity who would never break his word.

A new grandfather and avid outdoorsman who enjoys fishing, Yoho may very well be on his way to spending time doing what he loves.  While researching this article I contacted many individuals who live in Congressman Yoho’s district.  Nearly all of them respected the Congressman and nearly all of them believe he will keep his promise to voters to only serve 8 years in Congress.  If Yoho does indeed keep his term limit pledge, many of the cynical onlookers will be shocked as they will see something none of them have seen before – a politician who ran for office on a promise and kept it.

So will Ted Yoho become the political legend who kept his word or will he forever be known as a liar who broke his pledge like every other politician out there?

Only time will tell…

Jacob Engels is an Orlando based journalist whose work has been featured and republished in news outlets around the globe including Politico, InfoWars, MSNBC, Orlando Sentinel, New York Times, Daily Mail UK, Associated Press, People Magazine, ABC, Fox News, and Australia’s New Dawn Magazine, LauraLoomer.US, and The Gateway Pundit. Mr. Engels focuses on stories that other news outlets neglect or willingly hide to curry favor among the political and special interests in the state of Florida and beyond.