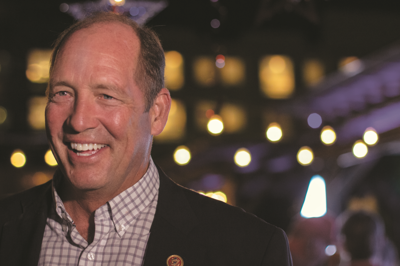 The leading term-limits organization in the United States has some choice words for Florida Congressman Ted Yoho who appears to be ready to break his pledge to serve only four terms in the House of Representatives and then retire.

When Ted Yoho ran against career politician Cliff Stearns in 2010, he promised to serve just four terms and then retire. He railed against the swamp and the politicians who behaved like pigs at the trough with a clever campaign commercial that went viral.

However, it seems that the swamp creatures in Washington D.C. may have hypnotized Mr. Yoho into thinking that breaking his promise to voters is more important than keeping his word.

As we have reported in the past, Congressman Yoho has secured a reputation as a man of his word. The kind of guy you can make handshake deals with in a world where most people require ridiculous employment agreements and contracts in order to keep them honest.

Nick Tomboulides, the Executive Director of US Term Limits, said that Ted Yoho has never been serious about legislation securing the idea of term limits in the House and Senate.

“He has always been grandstanding. Congressman Yoho made a promise to self term-limit, which he never intended on keeping. During his eight years in the United States Congress, he has never lifted a finger to co-sponsor our legislation that would require term-limits across the board in DC. He is no friend of the term-limits movement,” Mr. Tomboulides told Infowars.

With President Trump facing down an impeachment battle with the radical Democrats, one has to wonder why he would want someone like Ted Yoho to remain in DC. Yoho effectively bragged to CNN that he has failed to attend any impeachment hearings, despite having the right to sit front and center as he is a member of a committee overseeing the impeachment efforts organized by illegal coup leader Adam Schiff.

What does Ted Yoho gain by staying in DC? Voters would be wise to look to the good book when judging why Congressman Yoho might be ready to break his promise and go back on his word.

“What will it profit a man if he gains the whole world, yet forfeits his soul? Or what can a man give in exchange for his soul?” – Matthew 16:26