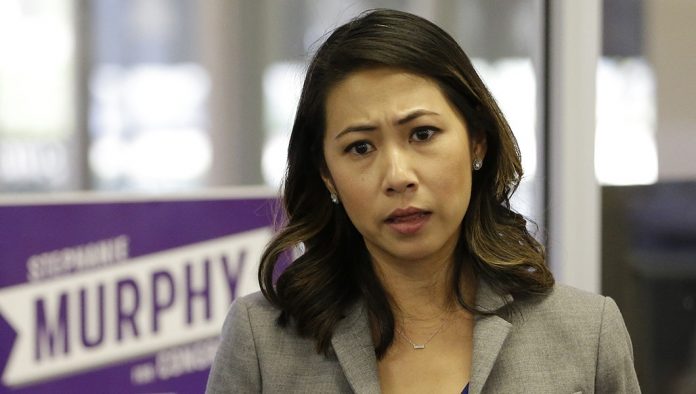 Leading Democrat rising star, Central Florida Congresswoman Stephanie Murphy, who chairs the allegedly “moderate” Blue Dogs Caucus, was visibly upset when the founder of Legal Immigrants for America raised concerns over the rise in Communism and Socialism within the United States.

Amapola Hansberger, who legally immigrated from the violent far-left and Communist Sandinista regime in Nicaragua during the Cold War, reminded Murphy at the townhall discussion with Murphy that the goal of Socialism is Communism.

When asked by Jim Hansberger about open borders and sanctuary cities, Amapola’s husband who founded and later sold the RAM Golf corporation, Murphy said that there must be a pathway and that these people “need to be brought out of the shadows”. When pressed about the violent streaks and costs of illegal immigrants, Murphy exploded and yelled “LET ME FINISH” at the table of her constituents.

She went on to reason that the misinformation and rhetoric of today’s political climate (of course not on her side but anything that highlights a need for a secure border and deportation of illegals), makes it impossible to do anything about the issue. This is one of the common talking points among progressives and leftists, who Murphy claims not to align with. However, she votes with Nancy Pelosi’s hard-line leftist agenda almost 100% of the time.

Congresswoman Murphy most recently endorsed gun-grabber Mike Bloomberg for President and said that Communism motivated her to vote for impeachment and proceed with the U.S. Senate sham trial where President Donald J. Trump was acquitted.

Watch Murphy get confronted in the video below, provided to TGP by Legal Immigrants for America.

I recently published a book on Murphy, titled SAIGON STEPHANIE MURPHY – THE TRUTH ABOUT AMERICA’S MODERATE, which highlights her Communist beginnings and the very real possibility of her role as a CIA-backed Manchurian candidate that could prove to be more problematic than Barack Obama.

The book has been such a hit, that we have had to order a second print already! GET YOUR COPY TODAY!