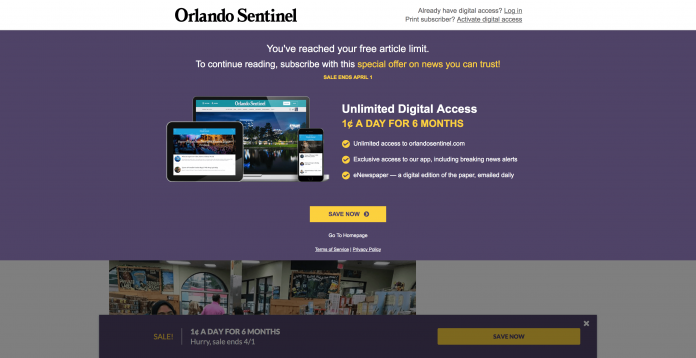 Even on content related to the pandemic, including an article published this evening about 38 people in Orange County having already been tested for Coronavirus.

As the Orlando Sentinel faces the likely formation of an ultra-left wing writers union, the newspaper, which has trumpeted the claim that “Democracy Dies In Darkness”, is literally leaving readers in “the dark” when it comes to their coverage on the spread of Coronavirus across Central Florid and the United States.

Years ago, the struggling publication which has continually laid off staff and offloaded equipment to stave of their inevitable demise, instituted a digital “paywall” that demands subscriptions from readers who visit their site more than a few times a week.

With the Orlando Sentinel Writers Guild, which accounts for nearly 80% of Sentinel writers is slamming the fact that journalists are being let go during the Coronavirus crisis, they are actively allowing their employers deny access to much needed news updates about the spread and government action being taken.

So what do people do who rely on getting their news from the Orlando Sentinel’s digital edition and cannot afford the recently instituted paywalls? The Sentinel has suspended paywalls in the past, most specifically during Hurricanes, but have failed to do so during the Coronavirus hysteria.

They have even used the crisis to blame President Donald J. Trump for the severity of what we are facing, a shocking show of partisanship and pettiness. Even CNN’s Dana Bash praised President Trump for his response to the Coronavirus’ presence on United States soil.

By allowing their paywall to remain active, the Orlando Sentinel is quite literally creating a scenario where they contribute to their readers “dying in darkness”, to borrow some of their terminology. Reports about curfews, Coronavirus tests, hotspots in Orange County are at your fingertips… if you can afford it.

This should show Central Floridians and Americans how much the journalists, who claim so often that they care for, actually only care about making money and radical unionization efforts that will prevent them from being fired for their consistent deluge of Fake News that continues to flood our lives on a daily basis.

While I am certain that we will get through this, it’s important to document the corruption and hypocrisy of the mainstream media, who refuses to leave politics out of a public health crisis.