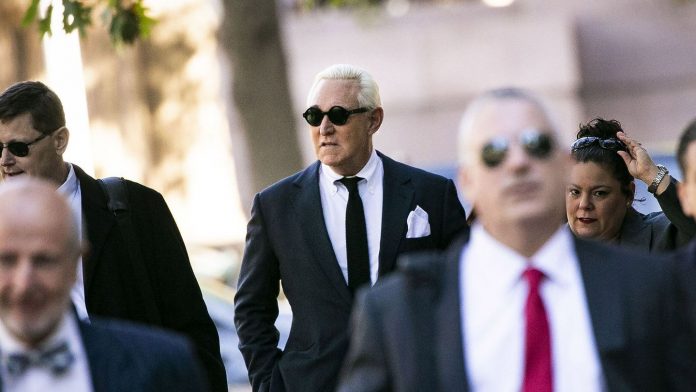 Stone prosecutor Jonathan Kravis has a long history of operating outside of the law to convict his victims.

When former Assistant US Attorney, Jonathan Kravis, resigned as a prosecutor in the Roger Stone case to protest a decision by senior Department of Justice officials that the 7-to-9 year sentence Kravis was recommending for the 67-year old Trump associate was excessive, he was described in the fake news media as a “career line prosecutor” and lionized by liberals in the media as a principled hero.

Kravis was recently appointed joined the Office of the Attorney General (OAG) as Special Counsel for Public Corruption for the District of Columbia DC under Attorney General Racine Karl A. Racine where he will oversee public corruption prosecution.

In fact, a closer examination of Kravis’ reveal a long record of abuse of power in the prosecution of conservatives and Republicans and also shows that Kravis defrauded the court in Stone’s trial, the same kind of prosecutorial misconduct that infected the trial of General Michael Flynn.

Criminal Defense Attorney Jesse Binall, who is among the lawyers defending Flynn revealed the true record of Jonathan Kravis for Townhall

“I was opposite Jonathan Kravis on The Ron Paul Three case, which was the prosecution of three Ron Paul campaign aids in Iowa. It was a politically-driven prosecution targeting three Republican activists.

First, Kravis and his partner violated an immunity agreement -a proffer agreement- they signed with a co-defendant in that case, and the judge dismissed the codefendant’s case based on prosecutorial misconduct. Then, Kravis hid exculpatory and impeachment information from my client, Dimitri Kesari.

Kravis’ team later violated my client’s attorney-client confidentiality, obtaining text message communications between Kessari and me (his lawyer), shockingly producing the conversations to another co-defendant in the case!”

Jonathan Kravis did the same thing to my client Kesari that he did to Roger Stone. Remember how they raided the 68-year-old’s home to arrest him? They did the same thing to Kesari. Feds busted into his house at 6 in the morning and dragged his 15-year-old daughter out on the side of a busy road, in her underwear. For context, this case was about a failure to report a campaign expenditure on an FEC form.”

“Kravis is very calculating. He is a former Obama White House lawyer and I think he came to the DOJ with a political agenda. In fact, I think he’s an angry Democrat who can’t stop abusing his power as a prosecutor.

I think he should be investigated under 18 USC 242 for deprivation of constitutional rights under the color of the law. Kravis has violated his obligations under Brady,in my client’s case and  he violated a defendant’s proffer agreement, a violation of a defendant’s 5th Amendment rights, and that’s just what I know about. I think the DOJ should look into all the cases that Kravis has been a part of.”

Kravis’s misconduct in Roger Stone’s trial is even more shocking. Stone’s attorneys were successful in getting the government to admit that the only “evidence” they had that Russian intelligence agents had computer hacked the Democratic National Committee was a redacted draft report from the Democratic aligned IT Firm Crowdstrike and that the FBI had never actually examined the DNC servers.

When this news hit the media like a bombshell out-of-control left wing Judge Amy Berman Jackson tightened the unconstitutional gag order on Roger Stone to prevent him from discussing the shocking revelation and Kravis filed a sur reply with the court falsely claiming that the US Government and the Mueller investigation had additional evidence to bolster their claim that the Russians hacked the DNC. Read here.

It is notable that Kravis’ untrue filing with the court did not include or attach any such evidence because in fact, as the Gateway Pundit has fully reported, none exists. In other words, Kravis, knowingly defrauded the court. Judge Jackson specifically bared Stone’s lawyers from challenging the false filing by Kravis or to use experts witnesses such as former NSA Russia specialist and Technical Director Bill Binney or to enter forensic evidence that would disprove the bogus filing by Kravis. Stone’s lawyers have the option of filing a formal complaint with the Department of Justice and with the DC Bar in an effort to end this left-wing activists’ practice of the law based on his abuse of power.

Special Counsel John Durham should examine the trial of Stone in which the Russian collusion hoax was used as a pretext to obtain search warrants for Stone in violation of his 4th Amendment rights and to charge him with highly contrived process crimes when no evidence of Russian collusion or collaboration with the web-based news organization, Wikileaks, could be found. In fact, Robert Mueller’s rogue prosecutors investigated and indicted Stone long after they knew that there was no collusion between the Russians and the Trump campaign.

In another act of prosecutorial misconduct, the Stone search warrants and the affidavits used to support them released this week clearly demonstrate the overreach of the Mueller investigation.  Prosecutor Aaron Zelinsky, formerly Deputy Counsel to Secretary of State Hillary Clinton, alleged, under oath, to several federal judges and magistrates that he had probable cause to investigate Stone for “Conspiracy Against the United States” “Violation of the Foreign Contribution Ban”, “Fraud and Related Activities in Connection with Computers” “Wire Fraud” “Aiding and Abetting”, “Money Laundering”, “Unauthorized Access of a Protected Computer” and  “Accessory After the Fact”. Zelinsky, a former columnist for the left wing Huffington Post ,neither had or found any evidence of any of these crimes.

Stone’s lawyers argued that the warrants and the affidavits supporting them lacked evidence and only contained supposition.  There were no factual allegations supporting the issuance of the warrants.  They were clearly based on misrepresentations by the FBI and the Muller team. In other words, Zelinsky lied.

When no evidence of Russian collusion, collaboration with Wikileaks, receipt or dissemination of stolen e-mails- including the stolen e-mails of John Podesta – was found, Stone was charged with lying to Congress even though there was no underlying crime to lie about and the Trump campaign’s interest in the already announced Wikileaks disclosures was a matter of public record.  Stone was convicted in a rigged trial with a hostile Judge and a corrupted DC jury.

After the trial the true corruption of the case emerged. Crazed left wing Obama Judge Amy Berman Jackson refused to acknowledge the significance of the repeated social media attacks on Stone in 2019 by Jury Forewoman Tomeka Hart and that they established bias that should have invalidated Stone’s conviction. Although the US Supreme Court has ruled that every defendant is entitled to a “impartial and indifferent” jury, Jackson incredibly claimed that Stone’s lawyers had not proved Hart’s bias. It is notable that Hart had her anti-Stone and anti-Trump social media postings on a private setting during his trial and that they only emerged when unearthed by the independent journalist Mike Cernovich.

To cover her tracks, Hart deleted her Facebook page she had operated since 2008 immediately after Stone’s trial, masking not only her Facebook postings but the Facebook links she would habitually post on twitter. Jackson refused to allow Stone’s lawyers to subpoena Facebook for the deleted material they claimed would prove Hart’s bias and earn Stone a new trial, creating a strong issue for appeal if Stone is not pardoned by President Donald Trump, who has strongly criticized the Juror’s anti-Stone and anti-Trump bias and the conduct of the trial by Judge Jackson.