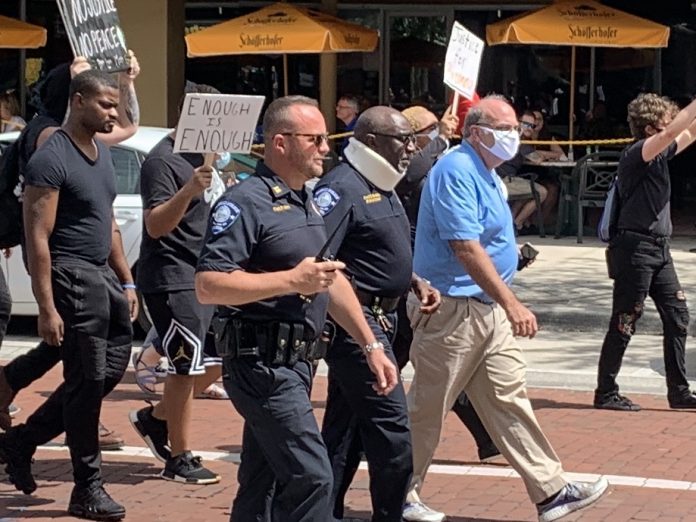 Sanford Police Department’s manpower had to block roadways and deploy most of their entire police force to cater to the angry protesters.

With Black Lives Matter protests continuing across America and the world, Sanford witnessed a small, but aggressive host of BLM activists march through their town on Saturday afternoon.

Gathering in a park about a mile away from Downtown Sanford, where Trayvon Martin was killed after getting into a scuffle with neighborhood watch member George Zimmerman in 2012, the protesters largely did not abide by CDC guidelines requiring masks or a distance of six feet or more between individuals. Despite Democrats and health experts arguing that we could not attend funerals or reopen society due to the risk of large groups gathering, they abandoned these stances and said recently that BLM protests are “worth the risk.”

Sanford Police Department’s manpower had to block roadways and deploy most of their entire police force to cater to the angry protesters. Even more upsetting? Cecil Smith, Sanford’s Chief of Police, marched alongside protesters as they repeatedly chanted BLACK POWER. Imagine the outrage that would sweep across cable news and social media if a WHITE police chief in a small Southern town marched alongside a radical alt-right group that was chanting WHITE POWER.

Efforts to reach the Sanford Police Department’s public information officer to obtain comment regarding the Chief of Police’s involvement and total cost of the demonstration went unanswered, after multiple attempts on the normal and emergency contact information provided and available to the public. A suspected member of Antifa, dressed in all black, even carried a metal shield during the march.

Such items, including flag poles and blunt force objects, are forbidden under local and state ordinances during public demonstrations. The protesters were even allowed to harass patrons of Downtown Sanford restaurants from a float with speakers blaring messages attacking law enforcement and anyone perceived to be “unsupportive.”