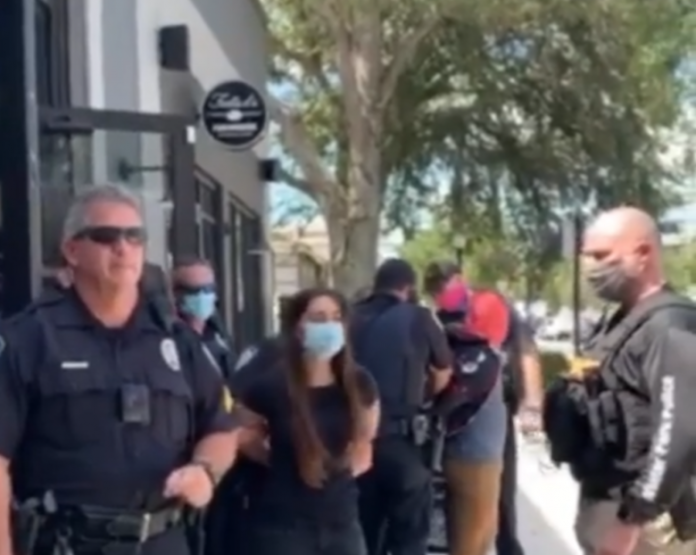 After a trans employee was fired for repeatedly violating company policies and dress code, “IT” collaborated with the Orlando Democratic Socialists to harass Foxtail Coffee employees and patrons.

Jazz Reyes, a militant trans person living in Central Florida, appears to think that rules should not apply to her/he/him/space alien/whatever. The trans movement, which has latched on to the nationwide riots and sprees of violence organized by terrorist groups like Black Lives Matter and Antifa, is now targeting an extremely popular coffee spot, Foxtail Coffee.

Our sources have confirmed that Reyes had a history of confrontational and hostile behavior in the workplace, violating numerous company policies and continually hiding behind her/he/him/space alien/whatever’s transition. To be clear, as a member of the LGBT community, you do you. However, the way the LGBT community wants to operate outside of workplace rules and the laws of the land is petty and selfish.

Imagine, in these tough times, you are lucky enough to be employed. Imagine being trained, acknowledging and agreeing to company policies. Then, while people are literally lining up for whatever job they can find, that you continue to violate policies and create a hostile environment for fellow employees and customers. That selfish person is Jazz Reyes.

Then imagine after being fired, you reach out to a violent anti-American mob to launch a harassment campaign against your former employer. Then imagine that your “peaceful” protesters forcibly enter the business and refuse to leave. Any normal business owner would then call the police and trespass these extortionists. Entering the business with signs accusing the business of being racist and pieces of cardboard riddled with things like “FUCK FOXTAIL.”

Central Florida residents should ignore the nonsensical shrieking from Jazz Reyes and her violent anti-American cronies. Show Foxtail Coffee some love and shoutdown any creepy leftists agitators if you are disrupted while supporting a local business during the Chinese virus pandemic.

Foxtail Coffee has denied the allegations made by Reyes and showcased their longstanding support for the LGBT community. Despite this, violent agitators continue to harass their employees and invade their Winter Park location as recently as Sunday morning.

We have learned that members of Antifa, a violent domestic terrorist group, is currently working with Black Lives Matter, Orlando Democratic Socialists and the John Brown Gun Club (communist militants), to “teach Foxtail a lesson”, implying that a riot or looting incident may be imminent.

In 2016, Foxtail Coffee Co. was formed. From the day we created this community coffee brand, we have been VERY CLEAR on our unwavering support for the LGBTQ+ community. We have been and will continue to be committed to providing a fair, safe, secure, fun and honest work place for our incredible team. It’s important that the community understands that for the last 4 years we’ve been supporting hundreds of organizations that join us with our journey to create positive impact in our local Central Florida community. History shows our commitment to the community and the future will as well. These accusations that are being made are false. We have always offered open, engaging, and safe environments for the LGBTQ+ community and will always make that a priority in our neighborhood cafes. We have a voice and the ability to make change so we will continue to use that in positive ways. We will not stand silent to false accusations and will aggressively stand up for our beliefs and acceptance of everyone.

Those looking to give Jazz Reyes a piece of your mind, send her some love on Instagram, username @jazzreyes1.