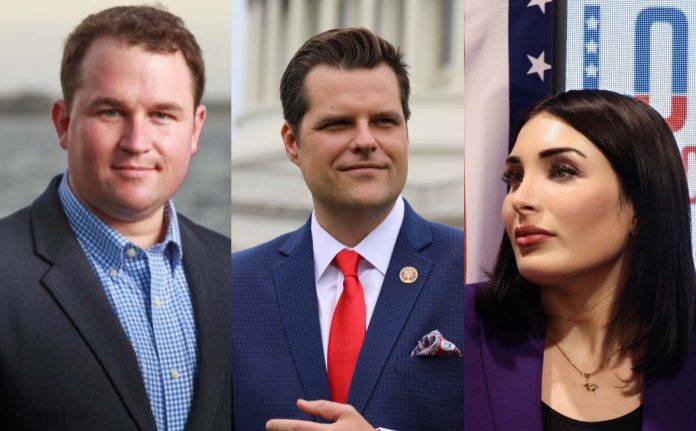 President Trump’s most vocal ally, North Florida Congressman Matt Gaetz, has thrown his support behind Judson Sapp (FL-3) and Laura Loomer (FL-21) a week before the primary elections in Florida are set to be held.

“I need the type of backup in Congress that can be provided with a great candidate like Judson Sapp. He’s already been right there fighting with us and supporting the America First agenda. When he joins us in Washington, he’ll do even more to help advance the Trump agenda.”

Sapp, who is a member of the Trump Victory Committee, has hosted the Trump family at his home and raised over $200,000 for President Trump’s re-election bid. He’s also hosted Roger Stone in his district a half-dozen times or more, helping him raise money for his legal defense fund.

“Matt Gaetz is the strongest ally of our President in Congress. He is a tireless fighter for the Trump America First agenda.  I’m honored to have the support of my friend Matt Gaetz.”

Speaking at the Palm Beach County Lobsterfest, hosted at Trump International, Gaetz had this to say about Loomer’s campaign.

“And when we find folks who they try to disappear or silence because they chose to speak out, we need to have their back! And that’s why I’m proud to endorse Laura Loomer for Congress.

Loomer, speaking to TGP this morning, praised Gaetz and said she looks forward to being a freedom fighter in DC.

I am honored to receive endorsements of my candidacy from Republican political icon Roger Stone and Florida Congressman Matt Gaetz, who is arguably one of the best fighters we have In Congress in the Republican Party.

I look forward to being a freedom fighter in Congress with him next year after I flip Florida’s 21st District Red in November. Together, we are going to be a great team for Florida, the American people, and President Trump. I’m also very excited that Roger Stone will be joining me on the campaign trail now that he has been granted clemency by President Trump.

“The Laura Loomer for Congress campaign has been incredibly focused on winning the Republican nomination on August 18th, and winning the hearts and minds of the constituents in Florida’s 21st District. Roger Stone has been a colleague and a friend of mine for years and I look forward to collaborating with him once again to ensure Laura’s victory in November. Roger and I have spent extensive amounts of time analyzing polling data and this race, and we are convinced that Laura is the right change agent to fully represent all voices inside district 21.

Her free speech platform is resonating with voters, along with members of Congress like Rep. Matt Gaetz and Rep. Paul Gosar, and we appreciate Rep. Gaetz’s full on endorsement of Laura’s candidacy today at the Trump International Golf Club in Jupiter, FL.”