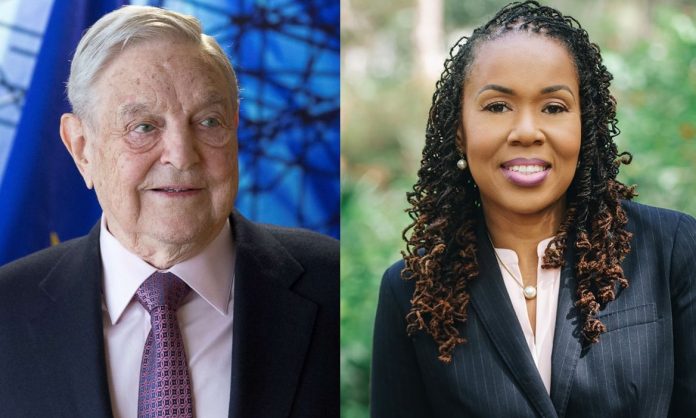 Who will be in charge of tracking enforcement officers flagged by Worrell’s office? Will any Republicans or Trump supporters be in this unit? Will those found to have made comments anti-white or anti-Christian or anti-Western culture be flagged and investigated?

In 2016, George Soros and groups connected to the far-left billionaire elected Aramis Ayala as the State Attorney for Orange and Osceola Counties in Central Florida.

The area covers everything from Downtown Orlando to our world famous theme parks like Walt Disney World and Universal Studios.

Ayala’s campaign was boosted by Soros, but so was her personal life. Records eventually revealed that Soros connected money flowed to her felon husband, who was plucked from obscurity to work for a political group pushing to restore voting rights for felons in the Sunshine State. Ayala lived up to her far-left rhetoric spouted on the campaign trail, famously refusing to seek the death penalty against a violent career criminal who gunned down an Orange County Deputy in cold blood.

Defending her decision on a local radio program, Ayala argued that Markeith Lloyd’s actions were “not heinous enough” to merit the death penalty and confirmed that during her tenure she would not seek the death penalty against any criminal, no matter the crime.

This led Governor Rick Scott to remove cases that qualified for the death penalty from her office.

Ayala decided not to seek a second term. However, her preferred successor, Monique Worrell was elected State Attorney this past Tuesday. Sadly for Central Floridians, who have faced violent riots and ongoing protests from Black Lives Matter and Antifa, Worrell is EVEN MORE FAR-LEFT than her predecessor. Like Ayala before her, Worrell got MILLIONS from George Soros.

Her campaign promises include ending the cash bail system, using race as a basis to determine whether or not someone should be prosecuted or face jail time and of course “police accountability.”

Everyone agrees that bad cops need to be rooted out and need to be held accountable. That is not up for debate. However, Worrell wants to create a database and special investigative unit to monitor police officers behavior online and offline.

From her campaign website detailing the criterion on which officers will be placed on a “list” by her office and further investigated.

1). has made racist, xenophobic, or sexist comments with witnesses or on social media.

Under normal circumstances this would be a completely legitimate reason to question the impartiality of an officer, however we have seen how far-left agitators like Worrell have made EVERYTHING they do not like to hear into a racist, xenophobic, sexist conspiracy theory.

Furthermore, who will be in charge of tracking, investigating, monitoring law enforcement officers flagged by Worrell’s office? Will any Republicans or Trump supporters be in this unit? Will those found to have made comments anti-white or anti-Christian or anti-Western culture be flagged and investigated?

We all know the answer to that question. The only focus of this though crimes unit will be to purge the ranks of local law enforcement of everyone except far-left zealots who will let Central Florida burn to the ground like Portland and Seattle.

Just last week, police were attempting to detain a local man wanted for questioning in a series of suspected gang shootings. When they encountered the suspect, his friend (who was in possession of stolen firearm), fled law enforcement before turning back towards police while reaching for the weapon. Sadly, the 22-year old died as a result. But that hasn’t stopped Worrell’s far-left pals in Central Florida from turning it into a rallying cry for Black Lives Matter, who are demanding answers and wondering why law enforcement officers used force, even with clear evidence that he was brandishing a firearm as he fled law enforcement.

Our sources tell us that Worrell is going to open up an investigation into every officer involved and is likely to press charges against them. This is what Soros can to do the place you call home, even if it’s home to the “Most Happiest Place On Earth”.

Stay vigilant and do everything you can to stand up to Soros funded candidates.