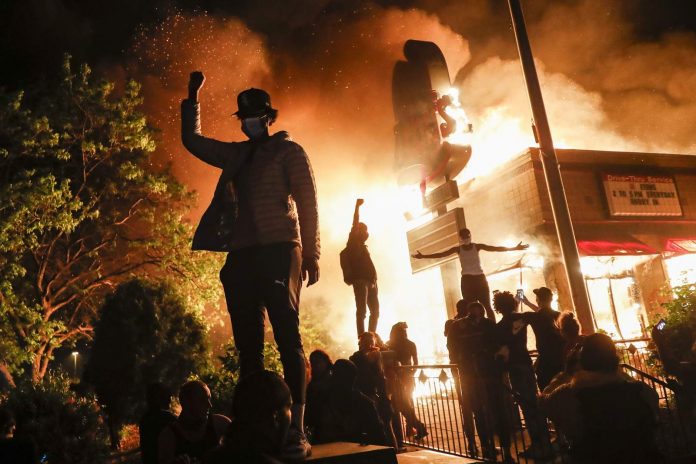 As part of a ridiculous series of nationwide protests, Antifa backed group “Refuse Fascism” will gather at Orlando’s City Hall this Saturday at 5pm to demonstrate against Donald Trump, who they claim is “literally Hitler.”

The same group of people that have brought anarchy, murder, rioting, looting and other craziness to cities like Portland and New York have now trained their sites on Orlando, Florida.

According to a Facebook page called “Refuse Fascism Orlando”, the violent domestic terrorist agitators plan to “struggle with all they have got” to “drive the Trump/Pence regime from office.”

On September 5th we must make a LIVING DECLARATION to the world that we are uniting, we are organizing, we are determined, we are preparing to struggle with all we’ve got, starting now and not stopping until the Trump/Pence regime is driven from power and its fascist program brought to a halt.

Members of local Antifa and Democratic Socialist groups have participated in violent riots, road closures and defacement of property across Orlando over the past few months, including members of the Refuse Fascism group.

While their actions have largely gone unanswered by local conservatives and right-leaning groups, that will not be the case on Saturday. A host of brave patriots plan on confronting the Antifa domestic terrorists, legally and lawfully as protected under the United States Constitution.

Sources with the Orlando Police Department have confirmed that their will be a police presence, though it remains uncertain if the Refuse Fascism group is permitted to gather on Saturday. In the past, the City of Orlando has stated that Black Lives Matter and similar Anti-Trump protests like the one happening on Saturday, have not obtained permits or covered the expense of road closures and the police presence as any other group is required to do.

Luis Miguel, a journalist and author, will be leading the counter-demonstration to the delusional Trump hatefest.

The Anti-fascists (actually fascists themselves) are coming to town. Time to show them their anti-America, anti-freedom agenda isn’t welcome here.

They say they are “not stopping until the Trump/Pence regime is driven from power and its fascist program brought to a halt.”

The time to put up opposition is now before they become emboldened and think they can turn our state into Portland.

The Central Florida Post will be on site to document the lunacy and expected violence from the “Refuse Fascism” group. We also intend on capturing the faces of the “Refuse Fascism” protestors and other information to help law enforcement identify them and bring them to justice.