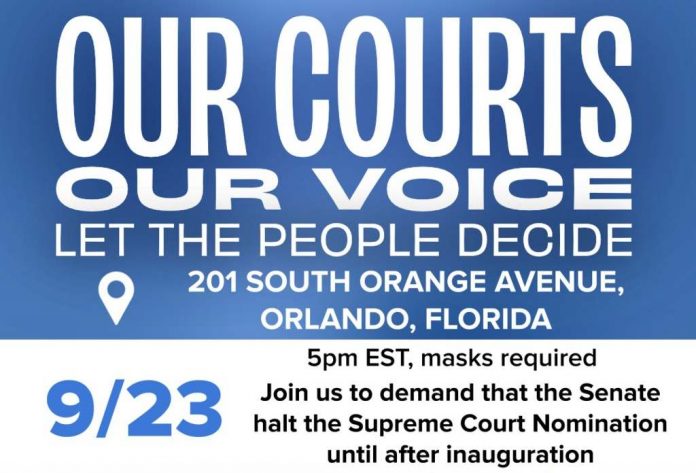 A coalition of far-left agitators and activists who have been involved in violent demonstrations in the past are encouraging people to gather Wednesday afternoon at Florida U.S. Senator Marco Rubio’s office to demand he work to delay efforts to replace Ruther Bader Ginsburg on the United States Supreme Court.

Led by the anti-gun and anti-constitution student group March for our Lives and the Democratic Socialists of America UCF Student Chapter, dozens of far-left activists are expected to take to the streets to demand the United States delay replacing the vacancy left on the United States Supreme Court left by the recent death of Ruther Bader Ginsburg.

Noted for her far-left stances and dedication to upholding Roe v. Wade, Ginsburg is a hero to the Democrats and pro-abortionist progressive activists who have celebrated the deaths of tens of millions of innocent babies since the Supreme Court ruling gave the greenlight to a billion-dollar a year industry that sells baby parts and destroys innocent lives under the guise of “healthcare.”

Similar gatherings have turned violent in New York and DC over the past 48-hours, where Democrat activists are threatening to “burn it all down” if Trump replaces Ginsburg with a conservative pro-life constitutionalist, which is what he intends on doing.

The media and their allies in the roving mob of violent anarchist protesters claim that because Ginsburg’s “dying wish” was to be “replaced after the election” that this voids President Trump’s constitutional right and obligation to submit a replacement for a vote to he held by the United States Senate.

While it is not unusual for Democrats to ignore the constitution, they are really leaving reality with these latest antics. They would never provide such quarter to similar demands by Republicans and actually tried to push through a replacement during an election year after the death of Justice Antonin Scalia.

The protest is expected to begin at 5pm. During previous protests over the past few years at Rubio’s office, activists have forcefully entered the office and refused to leave. Our sources confirm this and other “physical action” is on the table.

A group of conservatives and members of the pro-life community are expected to counter-demonstrate.

We will be on the scene to document the protest… STAY TUNED FOR UPDATES.