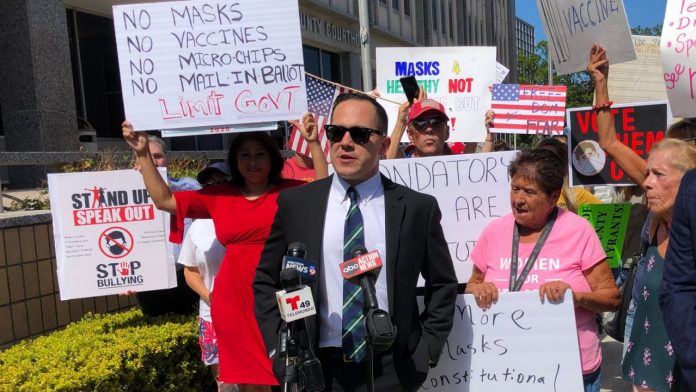 According to the Tallahassee Democrat, the leading newspaper in Florida’s capitol city, Sabatini’s legislation could prevent the Florida Surgeon General from mandating vaccinations, even with his expanded powers during a state of emergency.

Conservative firebrand and Florida State Representative Anthony Sabatini is standing up again for the personal rights of citizens during this Coronavirus pandemic. A lawyer by trade, Sabatini has fought mandatory mask mandates around the state of Florida, stating that local governments or municipalities cannot legally require citizens to wear masks.

As he continues to fight those legal battles, he is now focusing on the next potential violation of the citizenry during this pandemic; the state forced vaccination. With many “experts” and globalist anti-freedom forces pushing the idea of mandatory vaccinations and tracking, including the Chinese President who so horribly failed his nation and entire world with his bungled handling of the initial outbreak, Sabatini seeks to make it the law of the land in Florida that the government cannot legally force Coronavirus vaccinations.

According to the Tallahassee Democrat, the leading newspaper in Florida’s capitol city, Sabatini’s legislation could prevent the Florida Surgeon General from mandating vaccinations, even with his expanded powers during a state of emergency.

“The government should never have the ability to restrain a person and force them to take a vaccine—it should always remain an individual choice. This is is the most dangerous from of Big Government. The more we can remove government from our personal healthcare decisions, the better.”

This is not the first time Sabatini has used his power as an elected official to fight for fair minded and common sense constitutionalist legislation. He has sponsored or co-sponsored dozens of bills aimed at everything protecting freedom of speech on digital media platforms to stricter accountability for local governments.

His vaccination legislation was not the only bill he filed on November 30th that will make conservatives happy. Sabatini also filed a “campus-carry” bill that would allow students and faculty to carry concealed weapons on college campuses, which many people believe would provide individuals a better chance at protecting themselves and others in the event of a mass shooter or a similar disturbance.

Sabatini’s consistent flurry of hardline legislation and aggressive use of social media to defend conservative ideals and call out leftwing nonsense has Florida political circles buzzing about Sabatini running for congress in 2022 after districts are redrawn in Florida.