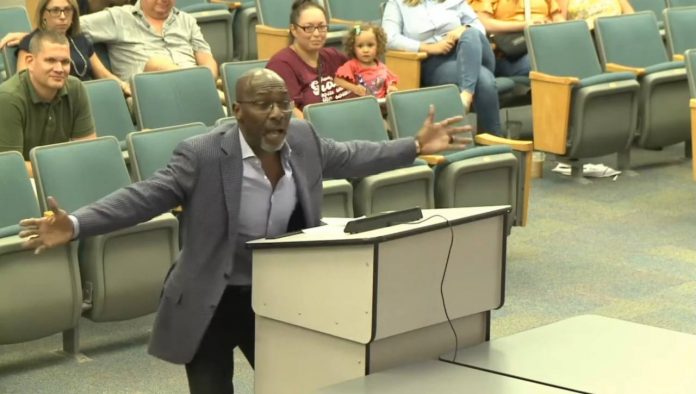 The Seminole County School Board had originally decided to allow parents to select an opt out option for their children, before a far-left mask obsessed teachers union pressured them into holding another vote on the matter.

A nearly 8-hour long school board meeting in Seminole County, which is located in Central Florida, was attended by hundreds of angry parents who showed up in force to voice their opinions on the school boards plans to adopt a district wide mask-mandate.

Governor Ron DeSantis has signed an executive order that bans these mandates across Florida. He’s withholding the salaries of school board members who defy this order and will soon begin fining businesses or governmental agencies that demand proof of vaccination, to the tune of $5,000 per offense.

The parents and community leaders who attended the day long meeting overwhelmingly opposed the idea of a total mandate. At one point, a child who suffers from a speech impediment, told the school board members that masked teachers and fellow students make it impossible for him to watch their lips and facial expressions, which he says helps him conquer his impediment.

View the 8-hour long meeting below.

One man appeared in a bee-keepers suit to make a point that because there was a 0.0001% chance of him being stung by a bee after leaving the confines of his home to attend the meeting, he had to “suit-up”, obviously mocking the real science and numbers that directly contradict “scientists, experts, journalists, fact-checkers” who say that its irrefutable that masks, mandates, and vaccines stop the spread of COVID-19. Another parent told the story of how three of his daughter’s friends successfully committed suicide due to the mental pressures of the lockdowns and mandates, with another attempting suicide, who was found by her family in time to save her life.

The most powerful speech of the day came when Harold Martin, an African-American resident of Seminole County, told a story about being raised in the Jim Crow Deep South. He referenced how his family was treated by business owners and said that he firmly believes that the majority of Americans at that time were not racists, but afraid of being cancelled by the majority Democrat mob of racists, who would cancel anyone who stood for equality.

Martin went on to state that the Seminole County School Board had previously acted against their own guidelines by falling victim to the BLM mob, who successfully forced the school board to rescind the appointment of an extremely qualified new superintendent, who happened to be white, for an unqualified African-American bureaucrat who was the choice of Black Lives Matter based on her racial makeup along. A courageous mother is now suing the school board over this.

This brave citizen concluded that just like he chose not to comply with racism during his upbringing, he is choosing to not comply with the discriminatory practices of the mask mandates that the Seminole County School Board was wanting to adopt. Watch his powerful testimony below.

Thankfully, due to the entertaining and data driven testimonies from parents, the SCSB decide to keep their opt-out policies, which places the choice to have children wear masks in school up to their parents.

It was only a week or so ago that the Seminole County School Board praised neighboring Orange County for removing the opt-out choice for parents. This proves that when you show up and present your case relentlessly, miracles can happen.